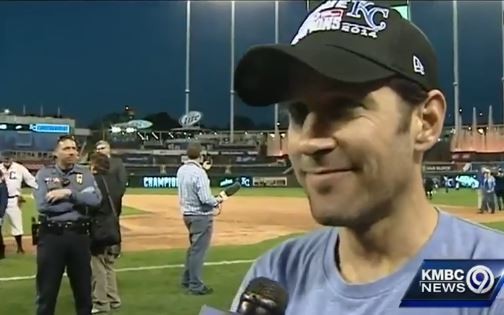 For the first time since 1985, the Kansas City Royals are headed to the World Series. That means it's time to party, and you're invited -- to Paul Rudd's kegger.

Rudd, the impishly handsome movie star originally from Overland Park, joked that he wanted to party at his mother's home during a post-game interview with KMBC-TV.

"I'm going to be partying at my mom's house," Rudd tells Johnny Kane of KMBC. Kane adeptly asks just who's invited, which is when Rudd opens the party up to all KC fans.

Plenty of Royals fans were happy to take Rudd up on his offer:

I think I'm rooting for the #Royals specifically for the party at Paul Rudd's mom's house. I'll bring an extra tap.

Daily RFT assumes us Cardinals fans were invited. After last night's disappointing loss after an early lead, St. Louis could use all the Missouri baseball revelry it can get.

See also: Paul Rudd Once Tried to Steal Jon Hamm's Prom Date, So They Faced Off in Trivial Pursuit

"This is amazing, the entire town feels it," Rudd told KMBC.