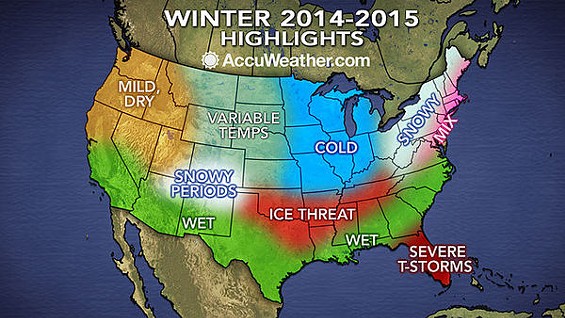 The polar vortex is coming, but this winter, it may miss St. Louis.

The U.S. winter forecast from Accuweather stirred up some national headlines this week by predicting that a winter like last year's, complete with extremely low temps and high snowfall, is likely in some parts of America -- but not so much in the Midwest.

"The winter season has several cold months planned for the Midwest, though not quite as extreme as last year," according to the Accuweather forecast.

Another winter forecast, this time from Live Weather Blogs, agrees that St. Louis will have a hard time repeating last year's winter from a very cold hell, thanks to a weak El Nino and a more active Southern jet stream.

Other parts of the U.S. aren't so lucky. The polar vortex will definitely rear its icy head in the Northeast, blasting arctic air -- but not as ferociously as last year.

"I think, primarily, we'll see that happening in mid-January into February, but again, it's not going to be the same type of situation as we saw last year, not as persistent," AccuWeather's expert long-range forecaster Paul Pastelok said.

South of Missouri, ice events are expected from eastern Texas up to Kentucky.

"I'm very concerned about the Tennessee Valley to the Gulf Coast, as far as extremes go this year," Pastelok said, according to Accuweather.