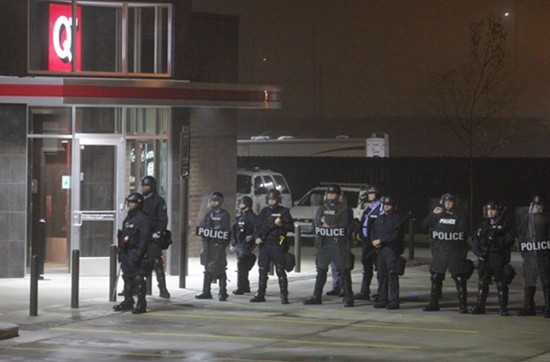 Along with ballistics evidence, the lab tests appear to confirm Myers fired a gun during a confrontation with an off-duty St. Louis metropolitan police officer on October 8. Police say the 32-year-old officer and six-year veteran of the force who has not been named, chased the eighteen-year-old Myers down the 4100 block of Shaw Boulevard before the shootout. Preliminary autopsy reports show that Myers, a resident of the 4200 block of Castleman Avenue, was hit six to seven times in the lower extremities and died from a shot to the front of the head.

Following the shooting last week, Myers' parents claimed their son was unarmed and only carrying a sandwich. Many who doubted the police narrative of the shooting latched onto the fact that Myers did, in fact, buy a sandwich at a nearby food mart minutes before the shooting. 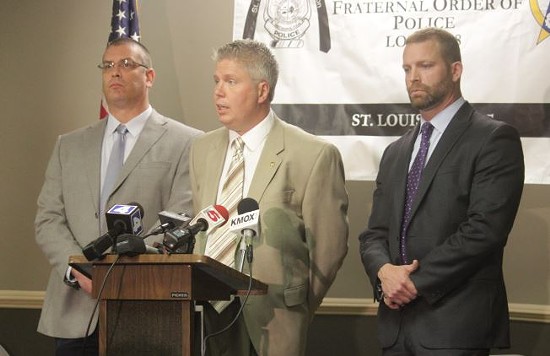 Jeff Roorda, business manager for the St. Louis Police Officers' Association, told reporters at a press conference yesterday that allegations of Myers only carrying a sandwich were "silly." He leveled blame at political leaders and the court system for St. Louis' epidemic of gun violence and for inciting protesters in the Shaw neighborhood.

"We're done, as a police union, standing in the shadows in these cases," said Roorda, a vocal supporter of law enforcement who's also campaigning for his fifth term in the Missouri Senate. "The fact that Vonderrit Myers and other black youths feel that they have to arm themselves and stand on street corners with illegal guns in their possession is a political failure, a failure of the court."

The night after the shooting, news of the Myers' death brought around 200 protesters to the area, and during the protests a number of police vehicles and a business were damaged. Then, during the following weekend's massive organized protest events -- dubbed Ferguson October -- demonstrators evoked Myers' name along with Michael Brown's and Kajieme Powell's while demanding accountability for the way the police departments handle fatal shootings involving officers. (Brown was killed by Ferguson cop Darren Wilson on August 9, leading to widespread protests and heavy police response. Powell was killed on August 19 after approaching two St. Louis officers with a knife.)

According to police, Myers and two other African American males were walking down the 4100 block of Shaw Boulevard on October 8 when the off-duty officer spotted them from his vehicle. The officer was patrolling the neighborhood for a private security firm and wasn't driving a police cruiser, but he was wearing his city police uniform.

During the press conference, the officers' attorney, Brian Millikan, said Myers and his companions turned and ran after seeing the officer, who then observed Myers grabbing the front of his pants in a manner indicating he had a weapon stashed in the waistband. Millikan said the officer pursued Myers in his vehicle and then on foot. After a physical altercation, Myers pulled a gun and shot at the officer at least three times, although Millikan said the officer recalls Myers firing between five and seven shots. In any case, Myers' gun jammed. The officer shot back at Myers seventeen times, killing him.

The officer has not been named, and Millikan said there aren't plans to release his identity because of the death threats made over social media.

The lab testing was conducted by the Missouri State Highway Patrol. Forensic scientists found gunshot residue on Myers right hand, shirt and inside the waistband and pockets of his jeans. In general, the presence of gunshot residue can mean an individual was simply near a shooting. However, police say the residue levels found on Myers and the the distance between him and the officer indicates Myers was a shooter.

Yesterday's press conference also revealed new background information on Myers. First, Roorda described a two-year-old criminal case against Myers, who at sixteen was charged as an adult for shooting a fifteen-year-old in the leg. However, court records from 2013 show the case was dismissed because the victim didn't show up to a preliminary hearing, according to the St. Louis Post-Dispatch.

Roorda and Millikan also addressed the photographs that began circulating on social media after Myers' death, allegedly showing the teen displaying three pistols, one of which Millikan said the officer identified as the same pistol used on October 8.

The Post-Dispatch reports that St. Louis police officers are trying to authenticate the photos. Jerryl Christmas, a lawyer for the Myers family, told the newspaper the photos are not proof Myers had a gun on the night of October 8. He also said the family identified Myers in the photos, but they believe the photos are at least a year old.

Continue to read the full text of forensic evidence report on Vonderrit Myers.