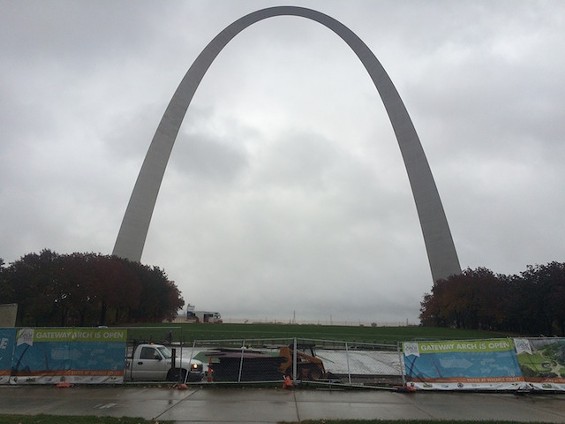 Engineers plan to descend the north leg of the Gateway Arch Thursday, weather permitting, to take samples of stains on the exterior of the monument. The excursion will be one of the few times since the Arch was completed in 1965 that anyone has climbed (with permission) on the Arch's exterior.

A crew of engineers began installing an anemometer (which measures wind gusts) and the system of ropes Tuesday that will anchor two individuals as they descend the Arch's north leg. The ropes will exit through the hatch at the apex of the 630-foot-tall Arch and loop through each of the windows along the north side.

"We're worried about the wind," Stephen Kelley, an architect and structural engineer with Wiss, Janney, Elstner Associates Inc., told Daily RFT on a rainy and windy Tuesday. "We need to have a gust of 35 mph or less. It's a gusty day today, but it's acceptable. As far as the rain goes, the Arch is wet right now, so when (engineers) are at the top of the Arch, I think they're going to be able to tell what is too wet."

See Also: Storm Chaser Gets Coveted Shot of Lightning Hitting the Arch -- And It Strikes Twice!

The Arch has attracted daredevils over the years who've ventured to the top of the monument with mixed results. In 1980, 33-year-old Kenneth Swyers of Overland landed by parachute on the top of the Arch but slid off the north leg and descended to his death. Twelve years later 25-year-old John Vincent of New Orleans claimed to have climbed the Arch with suction cups while others say he got to the top by helicopter. Either way, Vincent successfully parachuted from the top of the structure.

If the weather cooperates Thursday, two engineers will climb onto the top of the Arch and rappel down the north leg. As they move farther down, the engineers will fasten their ropes to a series of straps to prevent a gust of wind from blowing them off the surface.

"That's to keep everything stable," says Kelley. "If we didn't have those, somebody could be walking down and there could be wind that could blow them off and they'll go swinging. We don't want that to happen."

The stain samples are the third phase in a National Park Service project to assess the condition of the Arch's structure and potential future cleaning according to Anne Honious, the public information officer for the Jefferson National Memorial Expansion.

Visitors will still be able to go up the south leg of the Arch on Thursday but won't be able to see the sample collecting from inside because half of the observation deck is blocked off, Honious says. Binoculars and an information tent will be set up on Luther Ely Smith Square behind the Old Courthouse for those who want to watch the sample taking and ask questions.