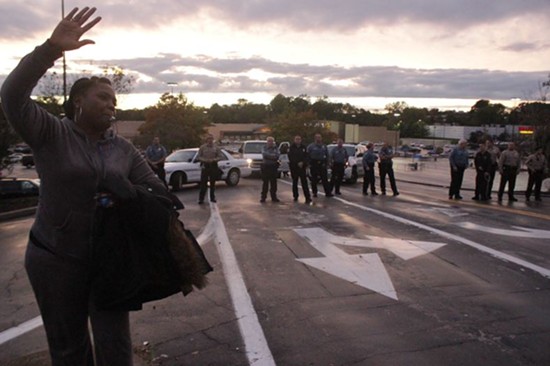 As promised, protesters engaged in a dizzying tour of civil disobedience Monday, capping off a weekend of demonstrations, sit-ins and various disruptions to what organizers call St. Louis' "business as usual" attitude toward police brutality. A recent police-involved shooting -- not to mention the death of Michael Brown in August -- drew thousands of activists to St. Louis over the past four days.

"This is about being visible, this is about being heard, and this is about reminding people that we will continue to disrupt the way people experience things in this city until there's justice," said Deray McKesson, a Minneapolis public school employee who's been shuttling between his home and St. Louis to organize demonstrations.

"This should be a wake-up call that people struggle at the hands of a system that doesn't always value black life," he said.

Dubbed "Moral Monday," the unrest yesterday led the St. Louis County Police Department, Missouri State Highway Patrol and the Ferguson Police Department to arrest 49 people, including including clergy members who were demonstrating in front of Ferguson police headquarters. Dr. Cornel West, an academic and author well-known for his work on race and class relations, was also arrested.

Six other protesters were arrested for blocking traffic and refusing to disperse on West Florissant Avenue and Lucas & Hunt Road, according to police.

Around 4 p.m. about 60 protesters unfurled banners and chanted inside the rotunda of St. Louis City Hall. Kennard Williams, a spokesman for Young Activists United, told reporters the group had sent a set of demands to Mayor Francis Slay. 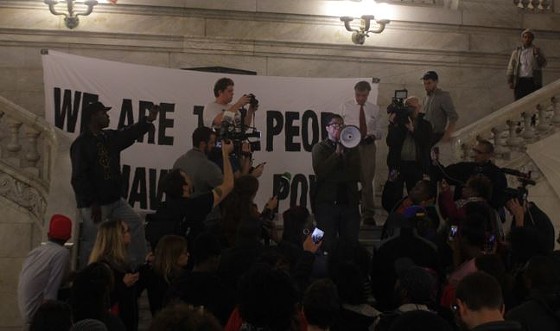 The demands include requiring officers who have "any interaction with the public" to wear body cameras, establishing a civilian review board, independently investigating fatal police shootings and disassociating from the federal government's 1033 program that provides military hardware to police departments.

"If they want to prevent all the things that have been happening, they'll take action, and they'll take it swiftly," said Williams, who also promised that protesters would return to city hall on Wednesday for another demonstration.

"I don't think we've been unreasonable in how we've conducted ourselves," he said. "As you can see, all you have is peaceful people. This is the face of peaceful protest, unless they push things, unless they escalate."

Maggie Crane, the mayor's spokesperson, later Tweeted that the city is already addressing the demands, and that St. Louis is not part of the 1033 program.

.@MayorSlay already ahead of each of protesters' demands: 1. Civilian Oversight 2. Body cams 3. Independent Review 4. Not in 1033 program

After the demonstrations at city hall, the protests splintered. The evening's events had no formal announcement and operated like flash mobs, with participants relying on hints via social media or word of mouth.

Around 5:20 p.m. a dozen or so protesters assembled to demonstrate at the Walmart in Ferguson. Attendees said they targeted the store for cutting benefits for part-time employees, and others mentioned the death of John Crawford, who was killed by a police officer in an Ohio Walmart in September.

When we arrived, police told Daily RFT that the store was closed. Police then ordered all protesters and media off Walmart's parking lot because the demonstration was an "illegal gathering."

Protesters retreated yet hung around at the edge of the parking lot. After a few minutes of back and forth between the crowd and nearby officers, four protesters sat on the ground inside the parking lot. The cops moved in and arrested them, apparently for trespassing on Walmart property. 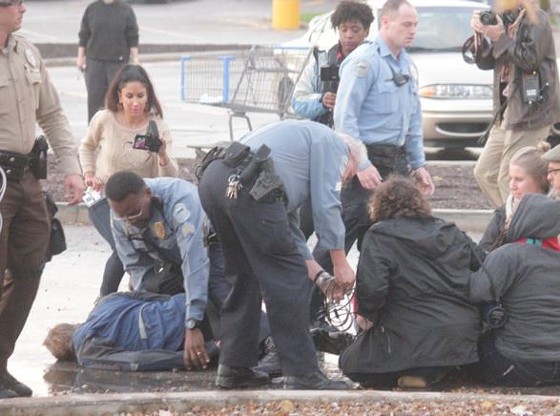 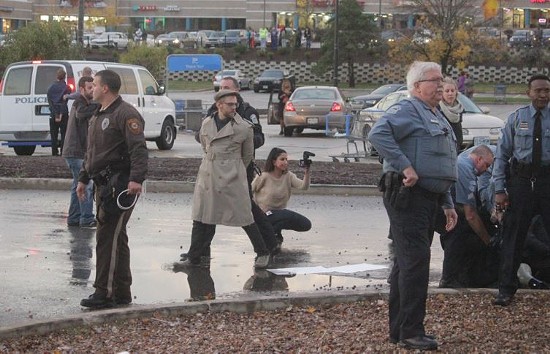 Following the arrests, the other protesters moved back to the intersection that leads into the Walmart complex, and officers formed a line to block both protesters and cars from entering the parking lot.

The Walmart shutdown wasn't popular with Beverley Green. The Ferguson resident said she supported the movement and wanted justice for Michael Brown, but protesting the store just made her life harder.

"I'm all for what they're doing, but we don't want this at Walmart," she said.

By the day's end protesters had hit three Walmarts in total, including locations in Maplewood and Bridgeton. During the protest in Maplewood, activist, rapper and RFT contributor Tef Poe was arrested inside the store.

The night's final event was a dual protest at the Edward Jones Dome. Organizers said that "someone" paid for about 50 tickets to last night's game, and protesters inside the stadium raised signs and dropped a banner over one of the video boards.

Photo of banner from #Ferguson related protesters over the end zone video board #STLRams pic.twitter.com/EFaQUDOm8i

Outside the stadium, around twenty protesters stood opposite the entrance, holding signs and chanting. The protesters' ranks swelled close to 9 p.m., and they turned their attention toward the fans leaving the game. In fact, several fans ended up joining the protesters, and soon many were waving the yellow "Defend Our Turf" foam rally sticks to the rhythm of the "Hands up, don't shoot!" chant.

After the fans finished leaving the stadium area around 10 p.m., the crowd of protesters -- which now numbered around 100 -- rallied in the middle of North Broadway. Organizers instructed the crowd to lay on the ground for four and a half minutes, symbolizing the four and a half hours that Michael Brown's body was left on the ground after he was killed.

Though most fans ignored the protesters, one woman in a Rams outfit rushed the crowd, screaming, "You are all assholes!" and had be physically restrained by a male companion.

Still, the reaction from Rams fans was a far cry from last week's confrontation between Cardinals fans and protesters, when some of "best fans in baseball" shouted things like "Africa! Africa! Africa!" and called the protesters "crackheads."