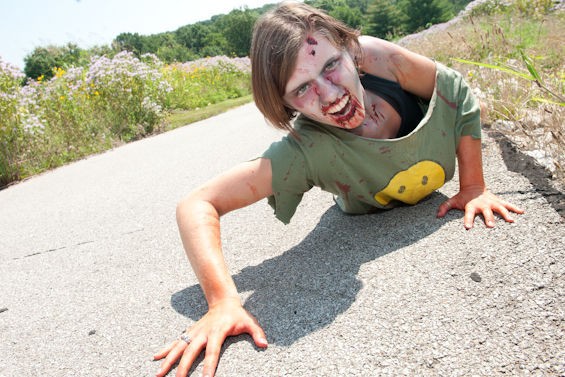 Just in time for Halloween, Missouri's outdoor experts are educating the public on the latest invasive species "threat": zombies.

The conservation department is even offering a hands-on course, called "Survival Skills 101: Zombies!," on how to survive an unplanned night outdoors in zombie-infested terrain (or in this case, 3,000 acres of forest in St. Charles).

See also: So You Wanna Be a Zombie? One day at Ghoul School

"Hunters, campers and others in the outdoors and on conservation areas should know there is always the chance they may encounter a zombie while out in the field," the conservation department writes in its zombie guide. Experts offer a guide to identifying a zombie: Does the thing in front you you have a gray-green, dull skin tone? Does it have open wounds or missing limbs? And, perhaps most importantly, is it trying to eat you?

Here are a few helpful hints for surviving the undead, from the MDC:

- A severed zombie head still bites. To get rid of zombies, the conservation department suggests controlled fires as an effective, if slower, weapon. "Complete incineration or explosion of the zombie is necessary to prevent further animation."

Want to learn how to survive a night outdoors (with or without a zombie attack)? "Survival Skills 101: Zombies!" will run from 5:30 to 9:30 p.m. on Friday, October 24, in the August A. Memorial Busch Conservation Area in St. Charles. The program is free and open to anyone older than thirteen.