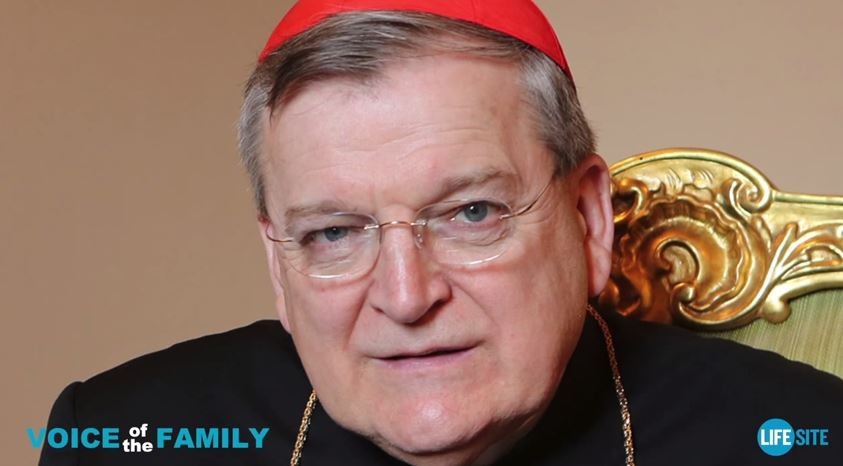 In case you didn't hear the big news out of the Vatican this week, the Catholic Church showed a dramatic softening in its approach to gay and lesbian people during a weekslong meeting about family.

The new approach, called a "seismic shift" and a "dramatic new tone" by experts, indicates that church leadership is warming up to tolerance of LGBTQ people -- even if it's not yet making any actual changes that would allow gays more rights within the church.

Update: The church has backtracked on its "changing" view of gays in the congregation. We'll see what the final report says at the end of the synod.

But while something from the Vatican's two-week synod on family issues seemed to open bishops' minds toward acceptance for gays and lesbians, former St. Louis archbishop Raymond Burke managed to make it through the meeting while stubbornly holding strong to his anti-LGBT stance.

On Friday, just days before the Vatican announced its landmark report Monday, Burke took a break from the meeting to give an exclusive interview to LifeSiteNews, a pro-life website, calling gay relationships "intrinsically disordered" and encouraging families not to support gay family members' relationships.

Burke, who has always come down strongly against gay marriage, divorce and other social issues, said he would encourage a family with a gay adult son not to invite the son's partner over for family holidays in case his gayness is "harmful" to the rest of the family, especially children.

We wouldn't, if it were another kind of relationship -- something that was profoundly disordered and harmful -- we wouldn't expose our children to that relationship, to the direct experience of it. And neither should we do it in the context of a family member who not only suffers from same-sex attraction, but who has chosen to live out that attraction, to act upon it, committing acts which are always and everywhere wrong, evil.

Instead, Burke suggests families and clergy maintain a relationship with the gay person so they can "try to help them to leave the sinful relationship and to begin to lead a chaste life."

There's so much in our society today which is giving the message that any form of sexual relationship, if it somehow pleases you -- or you're attracted to it -- is all right, is correct. And we don't want our children to get that impression, by seeming to condone gravely sinful acts on the part of a family member.

In February, when Pope Francis first gave a hint that the church could be warming to gays and lesbians by saying about them, "Who am I to judge?" Burke warned in a strongly worded column that pro-LGBT people shouldn't twist those words to support their cause. Via L'Osservatore Romano:

Surely, persons whose hearts are hardened against the truth will read something very different into the approach of Pope Francis, claiming that, in fact, he intends to abandon certain teachings of the Church which our totally secularized culture rejects. Their false praise of the Holy Father's approach mocks the fact that he is the Successor of Saint Peter, totally grounded in the Beatitudes, and that, therefore, with humble trust in God alone, he rejects the acceptance and praise of the world.

"This man's inability to speak with even a whiff of human compassion is intrinsically disordered if you ask me," Winters writes for NCR.

If you're not a fan of Burke's homophobic stance, don't worry; rumor has it he's about to go through a shift of his own, from Vatican power player to ceremonial figurehead.