"We're here to destroy systemic racism and white supremacy!" shouted one organizer at the crowd surrounding the clock tower in Saint Louis University's midtown campus around 2 a.m. Monday morning. Most of the group had marched from a rally in the Shaw neighborhood, the scene of last week's police shooting that left eighteen-year-old Vonderitt Myers dead.

Myers' death ignited a new round of protests over law enforcement's treatment of young black men, and organizers tell Daily RFT that the shooting, along with an influx of activists from all over the county, laid the perfect groundwork for so-called "direct action."

"The issue we're dealing with is white supremacy, it's not white people," said one protest leader, who gave his name as Dharuba Shakur, from the group Tribe X. "But it's hard to have that conversation with people who are white and who experience privilege and benefit from systemic racism."

One way to bridge that gap, he said, is by disrupting business as usual, in order to "open the consciousness" of those blind to society's pervasive inequalities.

Shakur noted that his group collaborated with other local activists to stage the massive sit-in at SLU. They targeted the campus, he said, as a way to further "radicalize" those out-of-town protesters who'd tasted true civil disobedience on Saturday, when dozens of people locked arms and blocked the entrance to a QuikTrip in the Grove. That night, police in riot gear moved in with pepper spray and arrested seventeen protesters.

Shakur said he was also dismayed by the earlier Saturday protests in front of the Ferguson Police Department, which included a police escort and had the feel of a "dance party."

"That's not really civil disobedience, being escorted by the enemy," he said.

The sit-in at SLU began as a rally in front of the Shaw Market, where Vonderitt Myers -- who police say was carrying a pistol -- bought a sandwich on Wednesday minutes before his fatal confrontation with an officer from the St. Louis Metropolitan Police Department. Police say Myers shot at the officer first. 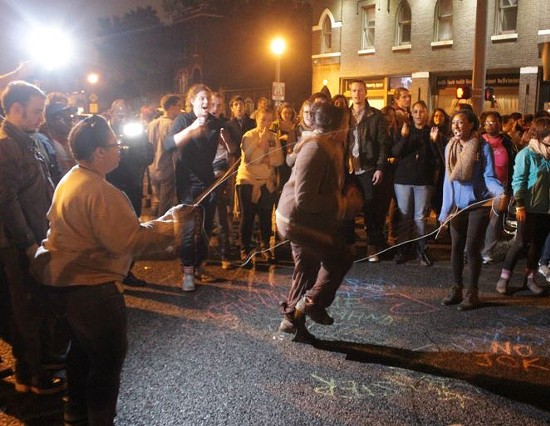 See also: The Faces of #FergusonOctober

At around 11 p.m. Sunday, organizers asked the crowd to split into two. Neither group was told where they were going.

One group of about 200 walked along Shaw Avenue and veered toward the Grove, where they stopped at Boyle and Manchester avenues. There, as a riff on the popular "They think it's a game, they think it's a joke!" chant, organizers brought out jump ropes, balls, sidewalk chalk and Twister. The protesters blocked the intersection for about 30 minutes before continuing the march to SLU.

Continue to read about where the second protest group marched -- and who they encountered on the way to SLU.

Guy on right tried to disrupt protest, saying #shawshooting was justified. Protesters drowned him out by singing. pic.twitter.com/Xe6unoxdoL

The second group stayed in Shaw for approximately a half hour awaiting instructions from protest leaders. At one point, a man who was not a part of the protest addressed the group about the Vonderrit Myers shooting. Several protesters suspected he was a police officer attempting to provoke a reaction.

"I love protests, I really do. But I need to know you guys know what exactly happened," he said.

After informing the crowd that he has two Purple Hearts and a bronze star from his time in the Marines, the man said: "What happened here Monday was a man shot at a police officer three times. And the police officer returned fire, protecting himself."

A few moments later, several protesters clapped and sang "Wade in the Water" together in unison, effectively drowning the man out. At that point, he nodded and said, "You guys are very good."

As protesters continued to sing, the man talked to some of the protesters about the shooting. Eventually, a protester came up to the man and gave him a hug, followed by more hugs from other protesters.

The group then mobilized to move toward its destination, although nobody but the organizers knew where that was. Their only instructions to protesters was to not chant and stay on the sidewalk. These instructions were followed almost without exception all the way from the 4200 block of Shaw to the Grand Avenue Bridge where riot police were waiting, lined up and banging batons against their shin pads.

A standoff ensued between protesters who wanted to cross the bridge and police who blocked their way, but the cops eventually allowed them to pass.

The protesters soon reunited with the other group, and both then proceeded through the arched gate into the SLU campus.

Netta Elzie, a local activist and an influential voice on Twitter, said that she and other organizers wanted to jolt students from their sheltered academic lives, and to show them that the neighborhoods located just minutes from their dorms are filled with real people living real struggles.

As Elzie and several hundred protesters walked through the campus, they shouted "Out of the dorms, into the streets!"

"If you're going to school for higher learning, I think the revolution would actually be the best form of learning," she said.

No arrests were reported at sit-in or the separate marches on the way to the SLU campus.

In a statement released this morning, SLU president Fred P. Pestello said the university had been given no notice of the protest. He described the protests as peaceful:

"Once on campus, the protesters were peaceful and did not cause any injuries or damage," Pestello wrote. "In consultation with St. Louis Police and our Department of Public Safety, it was our decision to not escalate the situation with any confrontation, especially since the protest was non-violent. While the protestors were sometimes loud, they were respectful of the students they met. At the same time, we ensured that all of our residence halls were secure and that DPS was carefully monitoring the scene."

Ray Downs contributed to this reporting.