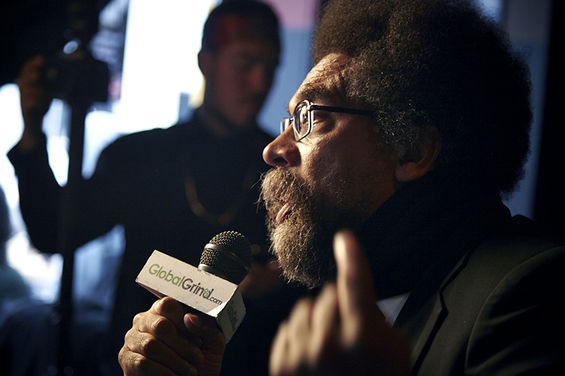 Dr. Cornel West got what he said he wanted.

West, a prominent author, activist and the keynote speaker at Sunday's mass meeting at Chaifetz Arena, was arrested Monday morning during protests in front of the Ferguson Police Department.

Update, 3:50 p.m.: Read below for an update from St. Louis County Police about West's arrest.

West told supporters during Ferguson October, a four-day protest against police brutality sparked by the killing of Michael Brown in Ferguson, that he wanted to be arrested.

"It's a beautiful thing to see people on fire for justice, but I didn't come here to give a speech," he said Sunday night. "I came here to go to jail."

UPDATE: St. Louis County Police say West was one of thirteen people arrested at about 12:45 p.m. at the Ferguson Police Station on charges of disturbing the peace. Here's what police said:

On 10/13/14, at approximately 12:40 p.m., 6 people were arrested by St. Louis County Police related to the Ferguson protests near the intersection of W. Florissant and Lucas Hunt for the state charge of Refusal to Disperse (574.060). Due to the safety of the protestors and vehicular traffic, those persons were arrested for continuously blocking traffic and not listening to officer's instructions to clear the street in between Buzz Westfall Drive and Lucas Hunt on W. Florissant.

On 10/13/14, at approximately 12:45 p.m., 13 people were arrested by the St. Louis County Police at the protest located at the Ferguson Police Department for the state charge of Peace Disturbance (574.010). Protestors told police officers on scene multiple times they wanted to get arrested. Arrests were not made until protestors started bumping police officer's shields and eventually forcing through the police skirmish line. Cornel West was among those arrested at the Ferguson PD.

Before his Monday arrest, West spoke at a hip-hop show featuring rapper Talib Kweli and joined a sit-in with students and activists in a square on Saint Louis University's campus Sunday night.

Video and media reports show West being handcuffed and led away from protests. We'll update when we hear if any charges are filed.