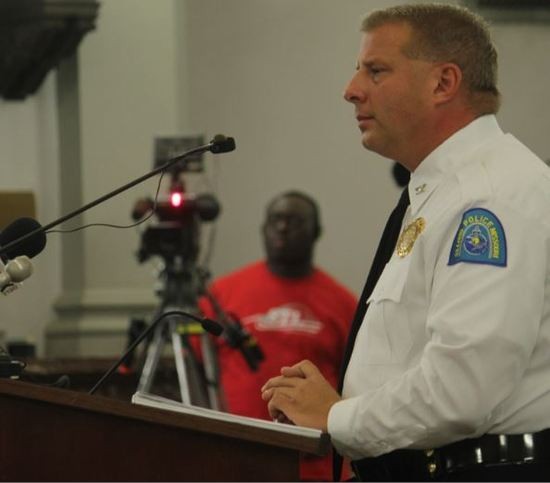 Updated 10 a.m. with information regarding previous charges against the deceased suspect for unlawful use of a weapon and resisting arrest.

Updated 1:15 p.m. with police incident summary of shooting as well as information regarding damage to police vehicles and an arrest of an individual during the protests following the shooting.

Updated 3:45 p.m. with news that the St. Louis Circuit Attorneys Office plans to partner with the U.S. Attorney's Office to investigate the shooting.

A St. Louis police officer, working a secondary job for a private security firm, shot and killed an eighteen-year-old male Wednesday while patrolling the Shaw Neighborhood.

According to police, the officer was in his police uniform, but working for Hi-Tech Security around 7:30 p.m. yesterday, when he drove past three young African American males in the 4100 block of Shaw Boulevard. Upon seeing the officer, the group began to run. St. Louis Metropolitan Police Chief Sam Dotson told reporters at a press conference last night that based on the way one of the men was running -- "holding his waistband, not running at full stride" -- the officer believed he had a gun.

The 32-year-old officer (and six-year veteran of the force) then followed that individual on foot through a gangway. Moments later, the officer and the suspect got into a "physical altercation," according to Dotson, in which the teen lost his grey hoodie and the officer observed a gun.

The suspect then ran up a hill and turned to fire three shots at the officer and kept pulling the trigger but his gun jammed, according to police. Responding to those initial shots, the officer fired back, killing the suspect.The officer was uninjured, and police say he fired a total of seventeen shots in return.

Relatives of the slain teen told reporters on the scene that the deceased's name was Vonderitt Myers Jr. In his press conference hours later, Dotson said that the suspect was "no stranger to law enforcement." Court records show that Myers faced a felony charge of unlawful use of a weapon stemming from a June 27 incident. Myers also faced a misdemeanor charge of resisting and/or interfering with an arrest for the same incident.

Updated information 10:00 a.m.: According to a probable cause statement (viewable below), Myers was a passenger in a vehicle involved in a high-speed chase early in the morning of June 27. After the vehicle crashed in the 1100 block of South Grand Boulevard, Myers exited the vehicle and ran -- ignoring a police officer's command to stop. During the pursuit, Myers allegedly retrieved a Hi-Point 380 caliber semi-automatic pistol from his person and threw it in a sewage drain. Additional court documents indicate that Myers was released from jail after making a cash payment of $1,000 -- 10 percent of his $10,000 bond. He was slated to go to trial on November 17.

Last night's shooting will be the first case reviewed by the police department's Force Investigative Unit that was established to audit police shootings after St. Louis cops shot and killed a knife-wielding man in August.

At least 200 protesters soon swelled the area near the shooting with police closing off part of Grand Boulevard to traffic. Protesters damaged a few police cars during the demonstration.

Updated information 1:15 p.m.: Police say three of their vehicles sustained damage during the unrest last night with protesters damaging the hood and fender and breaking the taillights on a 2011 Chevy Tahoe, breaking windows on a 2013 Tahoe and damaging the door and breaking windows on a 2007 Mercury Grand Marquis. At 1:00 a.m. today police also arrested a 32-year-old man near the protests at Grand Boulevard and Russell Avenue. Police say the man was wearing a ski mask and found to be a felon with the unlawful possession of a handgun.

Updated at 3:45: This afternoon Mayor Francis Slay announced that Circuit Attorney Jennifer Joyce will team with the U.S. Attorney's Office to determine what -- if any -- charges to file against the officer. That decision will come after the Force Investigative Unit delivers its case to the Circuit Attorney's Office. And, like the situation in St. Louis County where a grand jury is determining whether to charge Ferguson police officer Darren Wilson for shooting Michael Brown, prosecutors plan to release all information regarding the case should charges not be issued. "I believe it will add an extra layer of independence to a policy that is already open and transparent," said Slay in an online statement.

Here's the official account of last night's shooting from the police:

And here's the probable cause statement regarding Myer's June 27 arrest for possession of a handgun and resisting arrest.

Email the author at chad.garrison@riverfronttimes.com.