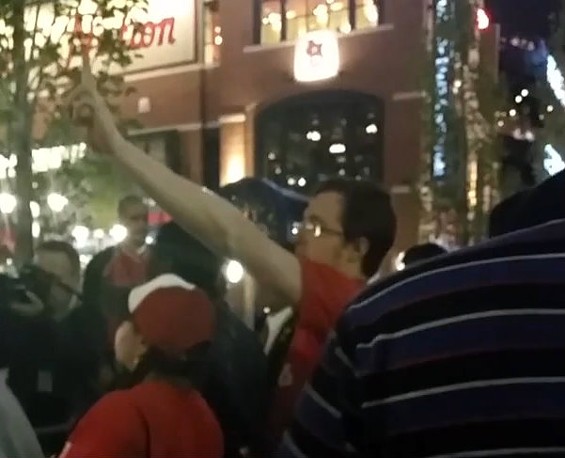 Daniel Suarez, a 28-year-old Collinsville, Illinois, resident and Cardinals fan, said he exited the Monday, October 6, playoff game to go to a designated smoking area and hand his friend a ticket over the barrier. When he got outside, he said he saw a small group of about a dozen Michael Brown protesters.

"First they were just protesting, and nobody was saying anything really. It was peaceful," Suarez told Daily RFT.

Then, he said, "it all started going downhill." Video shot by Argus Streaming News showing fans trying to shout down protesters and making racist jokes went viral this week.

Like many that evening, Suarez pulled out his cell phone and began recording. He shared his videos with Daily RFT; they show what things looked like from the Cardinals fans' side of the confrontation, including a woman claiming to know officer Darren Wilson, the Ferguson policeman who shot and killed Michael Brown. But Suarez said he wants to make the videos public because they show that at least a couple fans were "sympathizing with the protesters."

"It was embarrassing to be a Cardinals fan at this point," he recalled.

We've stitched together a series of short clips that Suarez shot. They show some of the well-documented ugliness, but there are also other notable points. For example, when one woman begins chanting "Darren Wilson," a man turns and says, "Shame on you!" We'll break down the notable parts under the clip:

1:18 A Cardinals fans holds up a peace sign to the protesters.

1:52 A man whirls around on a blond woman chanting "Darren Wilson" and says, "Shame on you!" What he says next is difficult to make out, but he's clearly admonishing her.

"You don't know what the fuck happened so don't talk to me," she retorts.

"You don't either," the man answers.

"I sure the fuck do, I know his fucking family and I know him, so don't fucking talk to me," she says back.

2:33 Suarez said that just before he began recording this clip the another blond woman in the foreground was shouting something to the effect of, "Why don't you go to work?"

"I have a job," the protester shouts back. "Why you mad?"

Then a Busch stadium security worker turns to the woman and says, "I'm going to ask you to leave," "Leave or leave," and finally, "All right then, go."

One of the other things that Suarez said he witnessed was a family coming out of the game and a boy who looked to be about five years old asking his mother what was going on. When she told him that the people were protesting he asked, "Why?"

"Because this is America, and they can do that," Suarez quoted her answer.

Though he said he wanted to bring these examples of Cardinals fans behaving better than their louder cohorts, he admitted that, he mostly witnessed bad behavior in the smoking area.

"Nobody was telling them to shut up. Honestly, there was the one guy, and everybody else, if they weren't shouting they were just kind of quiet and watching," he said. "I wasn't going to take either of these people's sides and honestly, I [felt] threatened by the Cardinals fans. I was happy that I was next to a St. Louis city police officer. I was worried that they were going to start violence more than the protesters. They were more aggressive than the protesters."

Daily RFT requested a response from the Cardinals twice, and so far we've not heard back.

Do you have video from either side of the confrontation? Share it with us, and help us paint a more complete picture of what occurred.