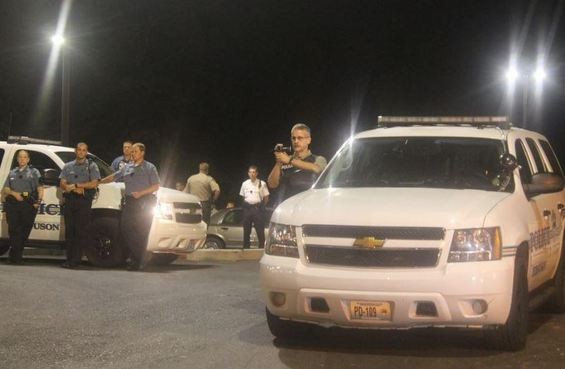 The St. Louis County Police Department is keeping quiet about its ongoing investigation of protesters. But they will say this: There will likely be an investigation for as long as the protests last.

That's what Lieutenant Jeff Burk, who heads the records division at the STLCPD tells Daily RFT. Burk also says that a "civil disturbance report" filed on the day Michael Brown was shot and killed by Ferguson police officer Darren Wilson is being used by police as a sort of umbrella investigation to file other protester-related incidents under, including arrests.

Last week, Daily RFT filed a Sunshine request for the video recordings for three days in September that STLCPD officers were seen making of protesters. That request was denied on grounds that the recordings are part of an "active investigation" related to arrests of protesters.

When we asked what investigation that was, we were given a civil disturbance report that was filed on the day Michael Brown was killed by Ferguson police officer Darren Wilson. That report had few details other than the time of the original incident -- the Brown shooting -- that led police to open an investigation on protesters. See also: St. Louis County Police Recording Protesters As Part of Ongoing Investigation

"There was a lot of people arrested under that report number for very different things," Burk says. "All the other report numbers will be referenced under that main number and will tell the story about what's really going on."

But for now, "what's really going on" is not available to the public. Burk says that all arrests and protest-related incidents involving police are part of an open investigation, which means investigative reports will not be public record until the investigation is complete or a court has ruled on the individual incident.

In other words, for at least as long as the protests last.

But the video recordings of large groups of people engaged in protest suggest that the STLCPD is gathering intelligence and evidence on people who might not be part of any unlawful activities. When asked if this means that law-abiding people are part of the open investigation, Burk refuses to elaborate.

"I can't talk about that much. That's something that we have to review," he says.

He adds: "We want to be as open as we can with stuff, but we don't want to release something that might cause a bias. We want to be fair and open with what we release, and release what we're supposed to."

Burk says he will discuss the matter further with another department. STLCPD spokesperson Brian Schellman says that our request for more details on the investigation has been sent to the county counselor for a response.