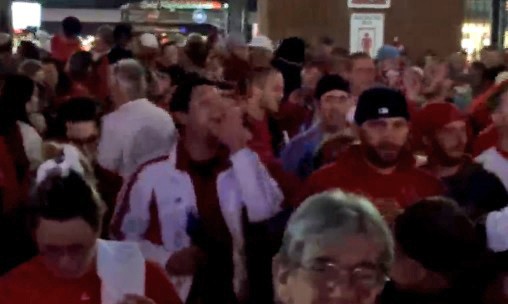 Not a great day to be one of the so-called "best fans in baseball."

Last night at the game at against the Los Angeles Dodgers, a small group of Ferguson protesters began marching and chanting in front of a much larger group of Cardinals fans outside Busch Stadium. Just a few minutes into their demonstration, the sea of red responded, first by chanting "Let's go Cardinals!" in response to "Justice for Mike Brown!"

And then everything got way, way worse. Mustafa Hussein, a cameraman for Argus Streaming News, captured the exchange on his live feed.

"That's sad that it gives our city a really bad look," he said this morning. "The incident was very intense."

Here's Hussein's clip of the incident. Deadspin did a pretty great job of breaking down the worst and most racist comments flung from the Cardinals' fan side of the barrier. They start with a man angrily yelling, "If they'd be working we wouldn't have this problem," to calling the protesters "crackheads" and telling them to pull up their pants.

At the three-minute mark, a group of young, white males begin yelling, "Let's go Darren!" as in Ferguson officer Darren Wilson, who shot and killed eighteen-year-old Michael Brown on August 9.

At about 10:30 a woman yells, "We're the fucking ones who gave y'all all the freedom that you have," and later chants, "Africa! Africa! Africa!"

Many of the fans seemed to become upset by the fact that a protester is waving an upside-down flag, which is obviously offensive to many, though as Hussein points out on the tape it's also technically a sign of distress or emergency.

At least one man offers something less than vitriol at 20:20. A protester asks, "You guys support Darren Wilson?" and the man answers, "Absolutely not. Cops should never kill kids, but what you are doing is not helping nothing."

"The sad part about it is, the fans that were there, you have no idea if they came in for the playoff game from outside the St. Louis area," Hussein told Daily RFT. "It really portrays St. Louis as super racist and shitty, but there's no way to prove those fans were from here."

Hussein added that even after this exchange, when the cameras were turned off, not a single Cardinals fan attempted to "reach across the aisle" so to speak and talk civilly with the protesters.

"They were completely unapologetic," he said.