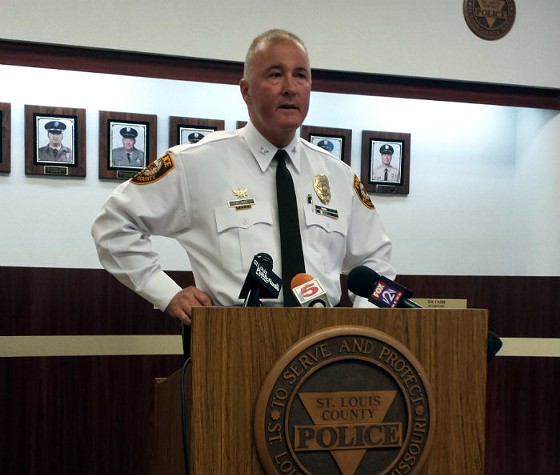 In a press conference late Friday afternoon, St. Louis County Police Chief Jon Belmar announced that effective immediately his department is "going to take over the security detail in Ferguson, Missouri." In other words, anything to do with protests in the wake of the shooting death of Michael Brown nearly two months ago will be handled by county police.

The announcement came after several nights of demonstrations outside the Ferguson City Police Department which lead to arrests. Last night, thirteen protesters were arrested for seemingly doing little more than chanting loudly. Belmar told reporters that his department is assuming command at the request of Ferguson city officials, but acknowledged last night's arrests did impact his course of action.

"It certainly gave me another sense of urgency regarding this," he said. "[Ferguson is] in the eye of the storm. I can only imagine that it's very difficult to make the best decisions they possible can in the environment that they've been put in."

Read all of our ongoing coverage of Ferguson here.

Video of last night's arrests in Ferguson. Belmar said there will be a commanding officer above the rank of sergeant at all protests regardless of where they take place, and that he or she will be in charge of any crowd control, arrests or other law enforcement actions. Anyone who is arrested will now be taken to the Buzz Westfall Justice Center in Clayton. Inquiries about arrests or other police actions during the protests should now go through the county police. Belmar acknowledged that getting information to the public from Ferguson has been extremely difficult and said he hopes this new strategy will change that. He emphasized that he believes protesters will notice much more "transparency" on the ground.

He also made the point that his officers may not be as aggressive about making arrests that do not involve "traffic or safety or preservation of life." He said that more discretion may be used in enforcing things like noise ordinances.

"Just because we have the ability perhaps through certain ordinances or statutes or different things like that, to enforce certain laws, it doesn't always mean that we should or we can," he said. "So peace disturbance, making loud noises, doing different things -- well that is interesting when we talk about those things because of the effect it has on our First Amendment rights. So those are things that we're going to be taking a look at down there also."

All media inquiries will now also be handled by the county, and press officer Brian Schellman told Daily RFT that the county recently hired a second PIO to help with the round-the-clock workload. He said they will be sending daily press briefings that will detail things like arrests and other law enforcement observations in Ferguson, even if absolutely nothing happened.

Belmar said this new arrangement will go on indefinitely, while Ferguson police continue to answer more typical calls for service in the community, like burglaries and the like.

The chief also brushed off the notion that his previous command in Ferguson -- which was during some of the worst clashes between law enforcement and protesters, and saw the use of tear gas, riot gear and heavy weaponry -- will hamper his ability to bring peace to the situation.

"Listen, we've learned from a lot of things that have happened out there. The truth of the matter is that it is a very difficult proposition to ensure safety of everyone and rights of everyone down there unless we have the resources to do that," he said. "We have to have enough man power to be flexible in what we do and how we do it. We know there's a lot of activity planned for that area -- as it should be. There's people that are going to come down and voice their concerns. We just need to be ready for these things."