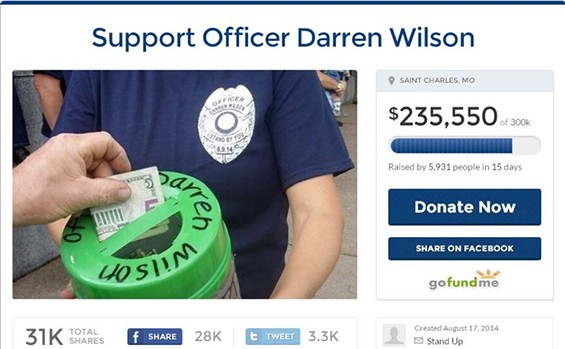 It's no surprise to us that Michael Brown and the protests in Ferguson that followed his death have dominated our Web traffic this month.

Weeks after Ferguson police officer Darren Wilson shot Brown in the street, St. Louis is still teeming with anger and frustration -- which could boil over again if Wilson isn't indicted for a crime, as reader interest in story No. 7 shows.

Here are our ten most-read news stories, in reverse order, for September with a small explainer pulled from each post:

10. What the Hell is St. Louis Thinking?: "My Home Smells Like Beer and Pretzels" [VIDEO]

"What the hell is St. Louis thinking?" The question led Henry Goldkamp to place dozens of typewriter stations across St. Louis city last summer. Goldkamp has now released a promotional video for the book, in which a single submission is read by a diverse collection of St. Louisans, starting and ending with the line, "My home smells like beer and pretzels."

9. Why Darren Wilson's Fundraising Pages Mysteriously Shut Down This Weekend After raising more than $400,000 for Ferguson police officer Darren Wilson, supporters halted donations on an online fundraiser to strategize how to use that money without violating tax rules for nonprofits.

8. Ferguson Police Parodies Will Leave You in Tears -- and Not From the Gas Grenades Our favorite is a parody of a 2010 episode of Cops, starring David Koechner as a racist dingbat in camouflage gear who rolls around Ferguson choking old ladies and stabbing basketballs.

7. No End in Sight for Darren Wilson Case as Grand Jury Term Officially Ends Wednesday A grand jury has been considering evidence for weeks in the case of Ferguson police officer Darren Wilson, and the hearings will likely continue through October.

6. Riverfront Times Seeks Juvenile Records for Officer Darren Wilson After all, if other media outlets are going to dig into Michael Brown's juvie records, then we can dig into Wilson's.

Good Works furniture store is closing after 23 years in the Delmar Loop, and the owners say the Loop trolley is to blame.

3. St. Louis Man Videotapes Street Fight, Gets Assaulted Himself; Police Respond, Shrug When a group of men saw Andrew Doty filming them assaulting someone in a vehicle, they turned their anger and violence toward him.

2. Pope Francis to Demote Raymond Burke, Controversial St. Louis Archbishop: Report The divisive rise to power of former St. Louis archbishop Raymond Burke may soon end -- not with a criminal conviction, as some have hoped, but with a demotion from Pope Francis.

1. The Best (and Worst) High School Mascots in Missouri Best-known are the Kewpies, the Hickman High School mascot named after a bald baby doll. There are the Joel E. Barber Middle School Buckskins, apparently named after clothing, and the West Plains High School Zizzers, named after nothing at all.