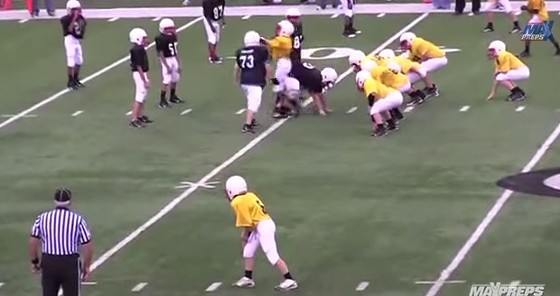 In a recent game in Jefferson City, mid-Missouri's Lewis and Clark Middle School unveiled the "Ugly Kardashian" in which, based on the video below, the quarterback apparently snaps the ball while appearing distracted by an imaginary paparazzi. The QB then casually walks past the defensive line while pointing skyward at something (Kim? Kourtney? Khloe?) before breaking into a mad dash for the end zone. Evidently the play works very well against nose guards (like the poor kid in the image above who remains crouched in position awaiting the snap).

The coach of Lewis and Clark drew inspiration for the name of his play from the film Little Giants and its trick maneuver "The Annexation of Puerto Rico."

"When I said [Ugly Kardashian] the first time in the huddle, they wouldn't stop laughing," coach Shawn Griggs tells MaxPreps. "I threatened to change the name of it because they would laugh every time I said it."

Even more impressive than the play, perhaps, is its second life online where the video below has been viewed 3 million times since Monday.

Email the author at chad.garrison@riverfronttimes.com.