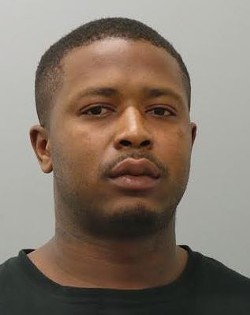 We're guessing Duianete Moore never expected his Tuesday morning jewelry heist at a south-county Kmart to go so badly. By the time he was in cuffs, the 33-year-old St. Louis man had been Tased twice, shot and then crashed his getaway car -- all while still in the Kmart parking lot.

Police say Moore is a well known shoplifter at other Kmarts in the St. Louis area, and he had hit the location at 3901 Lemay Ferry Road before. Employees immediately called the cops once they recognized him. After entering the store, Moore allegedly made a beeline to the jewelry section and began prying the locks off a display case with a screwdriver. According to police reports, he crammed more than $30,000 worth of jewelry into his pockets before walking out the door, ignoring security guards on the way to his SUV.

Once outside, however, More encountered several St. Louis County cops. Police say they ordered him to halt. Instead, he started running.

Moore made it to his SUV in the parking lot, got in the driver seat and locked the door. According to police spokesman Brian Schellman, two officers then rushed to the passenger door, managed to open it and shouted at Moore to stop. He started the engine, and one of the officers outside the car tried shooting him with a Taser. It was not very effective.

"I don't know why exactly, if it just didn't connect or if it missed or what the deal was, but it had no effect. That was the bottom line," Schellman said.

Seeing that Moore was about to drive off, the second officer hopped into the SUV. Moore drove north across the parking lot, with his passenger -- sixteen-year veteran William Borner -- now trapped in a moving vehicle. Schellman told Daily RFT Borner was "chucked to the floorboards" as Moore sped away.

Crouched in front of the passenger seat, Borner deployed his own Taser, using what's known as a "drive stun" technique that involves pressing the contacts directly against a suspect's body. Again, Moore appeared impervious.

Schellman said Borner tried grabbing the key out of ignition, but was unable to with the car still in motion. So Borner pulled out his gun and ordered Moore to stop.

According to the police account, Moore reached for the pistol. That's when two things happened almost simultaneously: Moore's SUV crashed into a planter island in the parking lot, and Borner fired his gun, grazing Moore's right leg just below the knee. The entire ride covered a distance of about 100 yards.

During a press conference Tuesday, St. Louis county police chief Jon Belmar noted that after the SUV came to a halt, Borner asked Moore, "Are you OK?" Then Moore asked Borner, "Are you OK?"

Moore was arrested and transported to a hospital, while Borner was treated for minor injuries to his back, hip and shoulder.

St. Louis County is in the process of equipping more officers with body cameras, but Borner and the other officers who responded to Moore's jewelry theft were not wearing them.

Moore was charged with for one count of stealing over $25,000, one count of resisting arrest by fleeing, and one count of second degree assault on law enforcement. He's currently being held on a $25,000 bond.

In light of the controversy surrounding the use of deadly force that followed the August 9 shooting of unarmed black teenager Michael Brown by Ferguson police officer Darren Wilson, we asked Schellman to describe the use of force policies that govern the actions St. Louis County officers like Borner. Schellman said the department's use of force policies do not include provisions for warning shots or shooting to wound.

"We're taught basically to end the threat, that's it," he said. "I can say that if [Borner] intended to actually pull the trigger, the intent was not to wound."

Though it's currently unclear if officer Borner's shot was intentional or possibly caused by the SUV crash, that detail -- and the rest of the incident -- will undergo full investigation before the case is sent to St. Louis County Prosecuting Attorney Bob McCulloch, said Schellman.