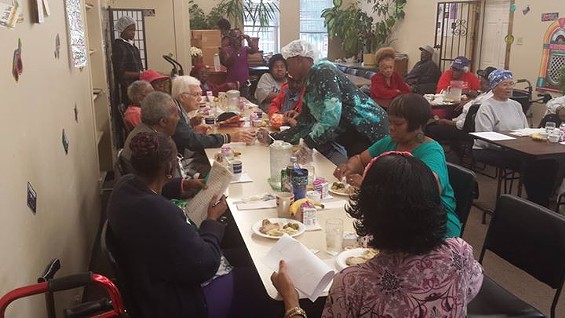 A community center in north St. Louis city says late-night burglars caused $10,000 in damage while stealing food and games from the children and elderly adults the center serves.

The burglars tripped the alarm at the Northside Youth and Senior Service Center, triggering a call to police, but staff says no officers arrived until almost twelve hours later, when an employee called 911.

Sunday around 9:30 p.m., burglars smashed their way into the center and stole electronics, video-game consoles and games, toys and sports equipment, says Sandra Norman, Northside's executive director. They also stole hundreds of dollars worth of food.

But the burglars didn't stop there. While inside, the vandals broke doors, cabinets and electronics, damaged windows, security bars and the balcony, and vandalized the 40-year-old agency.

Northside says its security and surveillance system caught the three male burglars in action breaking into the center through the roof. The security company called Norman when the burglars set off the center's alarm, so she asked them to call police and notify her if there was a problem.

"The police never showed up," Norman says. The next morning, at about 8 a.m. Monday, an employee came to work to find the building ransacked and called police.

There's so much damage around the computer lab that it'll be closed for at least a month.

"A lot of our children do not have computers at home," Norman says. "This is where they come to do their homework. A lot of seniors come up to use the computer. This is how they communicate with their grandchildren."

Norman puts the initial damage estimate at about $10,000.

Northside serves as an activity and community center, especially for older adults during the day and for between 15 and 30 youth each day after school.

"It's painful because so many neighborhood children look forward to coming here after school," says Norman. "During the daytime, we have a large group of seniors that gather and enjoy activities and a hot meal. Unfortunately, today we will have the painful duty of turning so many children and seniors away and informing them that many programs will not be able to resume until we have repaired damages and replaced the items that have been taken."

Norman says that while insurance will help cover some of the damage, she's "trying to figure out where and how we're going to pay for this. We're not a very rich agency."

Want to help Northside rebuild? The center is accepting checks made out to the NSYSSC or donations of supplies, especially replacements for the center's Xbox and Wii gaming systems.