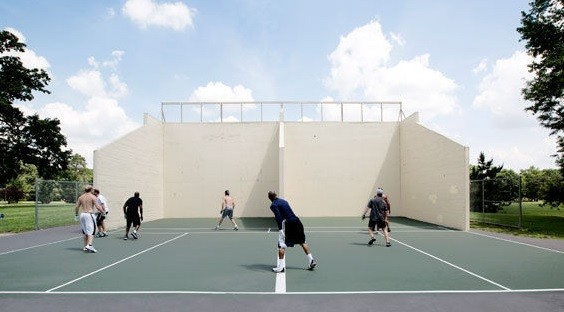 The Missouri Press Association announced the winners of its Better Newspaper Contest last weekend, and Riverfront Times picked up awards for its feature writing and website.

Taking top honors in the sports feature category was Riverfront Times managing editor Jessica Lussenhop for Pros and Cons, her June 2103 article on the former inmates who gather for competitive handball games at Forest Park. Per the MPA judges: "What a great story.... Getting these guys to talk turned this story from a really good feature into an obvious award winner."

In the news feature category, Riverfront Times staff writer Ray Downs took second place for Life for Pot, his October 2013 story on the only non-violent marijuana offender serving a life sentence in Missouri. Wrote the judges: "This is just good storytelling. Begins well with a lead that launches right into it. It takes a while to get to our main character, but worth the read. Good job of working in the background detail and first-person interview. Offers a lot of insight and a few lessons."

Lussenhop picked up another award, third place for news features, for her August 2013 piece The Extremely Long (and Sometimes Forgetful) Arm of the Law, about a man convicted of an armed robbery but -- owing to a clerical error -- not imprisoned until thirteen years later. Lussenhop's article was later featured on This American Life. "Good lead that draws the reader in, and the story just gets better from there. Easy, very informative narrative style with plenty of details and quotes. Every side is told in this credible, sad-but-true tale," wrote the MPA judges.