The American Civil Liberties Union of Missouri argued to a federal judge Monday that St. Louis County and Missouri State Highway Patrol are enforcing an unconstitutional "five second rule" that allows cops to arrest protesters at will.

According to the witnesses brought by the ACLU, police used the tactic arbitrarily, harassing some protesters and letting others go. St. Louis County Police Chief Jon Belmar admitted yesterday the rule even confused officers, who misinterpreted his orders and used the "five second rule" to arrest protesters during the peaceful daytime hours.

"There were pass-ons that confused the officers," said Belmar, who told the St. Louis Post-Dispatch he intended the rule be enforced only at night, when the perceived threat of looting and violence was at its highest.

"I don't think we were clear enough as commanders ... to tell (officers) if there's a different dynamic -- there's not a problem -- don't worry about it," he said.

However, the rule gave law enforcement so much free reign that it violated the due process of the protesters, claims ACLU attorneys.

On August 18 and 19, the first two days when the "five second rule" went into effect, police arrested 65 people for failing to disperse. At the hearing yesterday, Belmar said the Missouri State High Patrol specifically used the misdemeanor charge as a catch-all tool for enforcing Governor Jay Nixon's state of emergency declaration and accompanying curfew; Belmar also said police wielded the rule as a preventative measure against crowds gathering in a single spot and causing trouble.

Protesters did not take the "five second rule" well.

"They just provoke people with all this," Jacquelyn Hall told Daily RFT on August 18. "They make people angrier because it's trying to tell them they don't have control over where they live, even though this is their home."

The next day, August 19, Daily RFT reported that officers rushed into a crowd of protesters and media, arresting people seemingly at random.

"The protesters are peaceful out here, and all the cops are doing is denying us our constitutional rights," said protester Markis Thompson at the time.

The ACLU agreed. The organization filed a temporary restraining order against the "five second rule," but it was defeated by Missouri Attorney General Chris Koster, who argued the rule was "narrowly tailored" to address the violence on West Florrisant Avenue.

That claim, though, is hotly contested by the ACLU and multiple protesters.

"The unbounded nature of the rule has led citizens to be threatened with arrest for activities that ordinarily would not even border on the unlawful," argued the ACLU in an court filing, which includes extensive testimony from protesters and legal obeservers. ACLU employee Mustafa Abdullah testified he was threatened with arrest for trying to pray and for walking with a reporter.

"I had been threatened with arrest five times in an hour," he said. 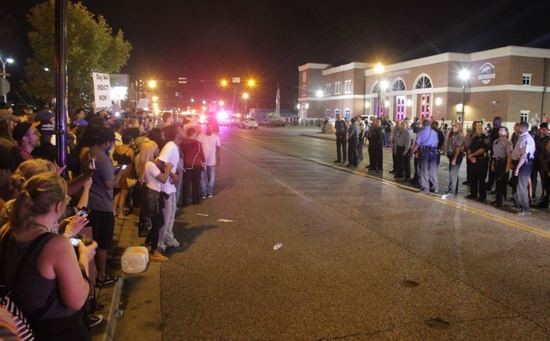 Monday's hearing didn't just involve events from last month. This past Saturday, the ACLU began hearing reports that police were ordering protesters at the Ferguson Police Department to stop gathering on the sidewalk -- or face arrest.

As a result, ACLU Missouri executive director Jeffrey Mittman was on the scene that night. He addressed a group of demonstrators near Faraci Pizza, and outlined a plan for a small group of people to station themselves at the Ferguson police headquarters.

"Let's start with the police station," Mittman told the crowd. "What we want is a clear record. Get it video taped, ask the officer, 'Officer, are you saying I don't have the right to stand here peacefully in front of the police station?'"

"There is no constitutional right to impose a five-second rule," he told Daily RFT. "People are peacefully protesting, standing and exercising their First Amendment rights. As long as they are on the sidewalk, not blocking traffic, not interfering, that's something they have a right to do."

That night would turn particularly chaotic following two officer-involved shootings, but it appears one protester, Johnetta Elzie, managed to film an unidentified Ferguson cop who was forcing her to keep walking on Saturday. The video showed the officer answering her question about a free-assembly zone for protesters to freely gather.

U.S. District Judge Catherine Perry did not issue an immediate ruling following Monday's hearing, though her decision on the ACLU's request for a permanent injunction is expected in about a week. You can read the ACLU's full court filing, which includes the multiple accounts of protesters' testimony, here.