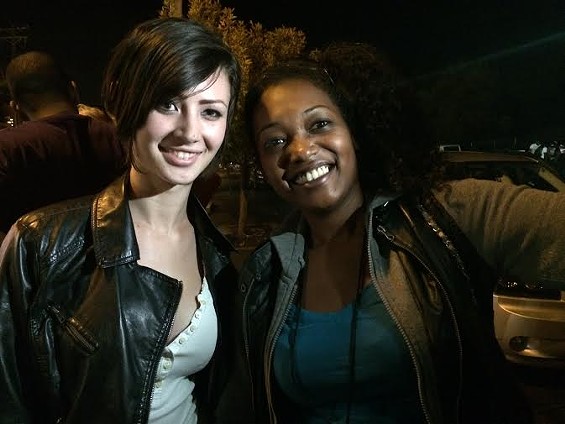 This time, Sasha Pain is the one behind the camera.

The cam girl says she and two friends drove for 34 nonstop hours from San Francisco to help demonstrators in Ferguson by filming protests and sharing them with her audience.

"I want people who follow me to have to see it," Pain tells Daily RFT while live streaming as demonstrators played instruments and sang chats in front of the Ferguson Police Department. "This isn't something that happened to me or in my town, but it's something that happened to a citizen of my country and a son to somebody. That's enough for me to be here. This is what people need to focus on."

I might be trading chaturbate for ustream this week, guys.

Y'all ready for some naked news?

Pain, her boyfriend and videojournalist Jessica Hollie (who tweets and live streams as @BellaEiko) arrived around 1 a.m. Saturday night, as things died down after a violent night in north county. Two police officers were injured: A Ferguson police officer was shot in the arm by burglars, and a St. Louis city cop was shot at while driving on Highway 70 and injured by broken glass. Officials so far say neither incident is related to the protests teeming in Ferguson since the death of Michael Brown nearly two months ago.

In her first day in Ferguson, Pain says she's amazed by how welcoming, hospitable and friendly protesters are.

"It's peaceful, and it's creative and artistic," she says of the protests. "The cops keep fucking pulling up bullshit laws and telling people they can't do things that they should legally be able to do. They're not letting it get them down. They're working around it, and they're becoming more creative and resilient. It's amazing." 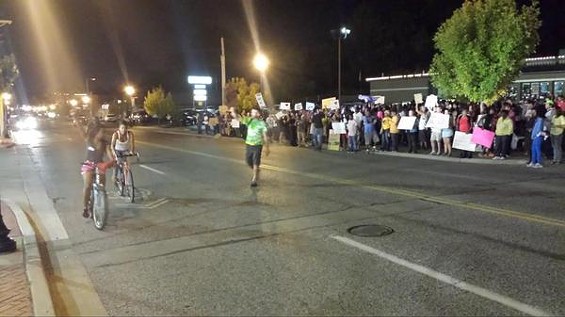 Pain, who makes webcam sex videos, says won't stop working just because she's on the road. When she has an Internet connection in Ferguson, she'll make sex tapes and donate proceeds from videos to buy supplies to protect protesters from tear gas, she says.

"Everything that I make while I'm here that I don't need to feed myself, the people I'm with and over my bills is going toward buying food for protesters and gas masks," she tells Daily RFT. "They're going to do what they're going to do. That's not my place to be a part of it unless they ask me to be. But I will do what I can to make it less painful, more safe and easier on them because that's what I'm here for."

Here's some things we need in Ferguson.

It's all worth it, she says, to help protesters stay safe.

"The police are just so disrespectful," she says. "The people have been so peaceful in everything that I've seen myself and in videos, and to watch them fucking get beat on and treated like fucking animals. They're getting hog tied and carried off and choked out, and it's just like, fuck."

"I brought some jewelry and shit to pawn if I need to, so whatever it fucking takes," she says. "I'll get rid of fucking everything I have. I don't give a fuck. I'm going to be here to try to help -- keyword 'help.' I am just here to do whatever I can."

Like the protesters she's live streaming, Pain wants to see charges filed against Officer Darren Wilson, who shot and killed Brown on August 9. She also wants to see the city create a civilian review board so police have public oversight after officer-involved shootings.

"I think that Darren Wilson should be fucking indicted and should have to stand in front of a jury of his peers," she says.

Pain says she was outraged when she saw officers were wearing "I Am Darren Wilson" bracelets during clashes with Ferguson protesters. As the mother of a three-year-old, Pain gets worked up thinking about the loss of Lesley McSpadden, Brown's mother.

"The fact that the cops are out here wearing 'I Am Darren Wilson' bracelets and shit, like, how can you fucking disrespect somebody's mother like that after you murdered their child," she says. "Even on the far-off chance in fucking la-la land that [the shooting] was justified, you don't do that to somebody's parents or their family. You don't disrespect the dead like that."

Pain says she's here to fight against ignorance and injustice, though she's aware that her profession may distract onlookers from her cause.

"I don't want to steal the spotlight," she says. Later, she added, "I'm here as an upset mother, not a sex worker."

Instead, Pain says she wants to spotlight to shine brightly on the injustices Ferguson protesters are fighting against.

"People in the Bay Area, that I know, at least, didn't really care" about Ferguson, she says. "They didn't view it as their problem. It's an American problem. It's a world problem. It happens every day all over the world, and people need to pay more attention to it."