[UPDATED] Ferguson Protesters, Including the Lost Voices, Get Kicked Out of Protest Sites 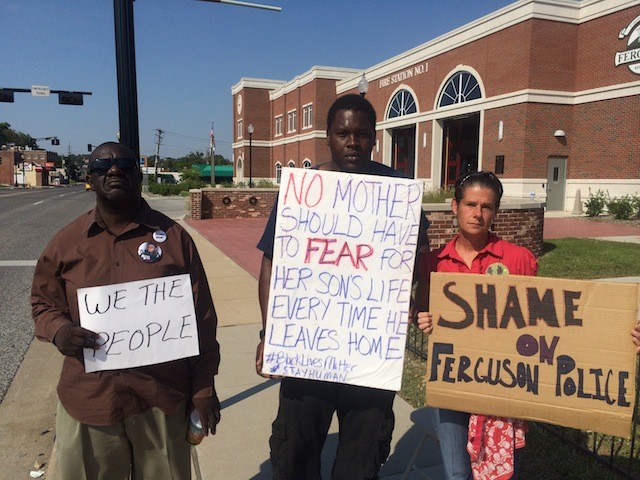 Since the death of Michael Brown, protesters have flocked to two parking lots to hold demonstrations, arriving early in the morning and sometimes sleeping in tents or on the ground.

There's the parking lot in front of Andy Wurm Tire and Wheel, on South Florissant Road, where Wurm gave permission to protesters to take turns holding signs as cars honk in support as long as they don't damage the property.

Then there's the encampment on West Florissant Avenue, where about twenty people were sleeping in tents in the parking lot of a former Ponderosa Steakhouse.

But protesters aren't allowed at either site anymore.

On Friday morning Wurm asked the group of regular protesters outside his tire and auto shop to leave. Some protesters think he was pressured by Ferguson police, but Wurm says that it was just time.

"After all the violence last night, we're done," he told Daily RFT referring to the tussle between police and protesters Thursday night that resulted in several arrests after Ferguson Police Chief Tom Jackson marched with protesters.

By now Wurm knows which individuals incite violence and which ones are protesting peacefully. He says after he told protesters they had to move early Friday morning, most of the people graciously picked up and left, but two boys told him they planned to throw bricks through his windows that night.

"I told them, 'Do what you gotta do'," Wurm says. "They're just material things. I won't lose sleep over it."

But the story at the second protest site, on West Florissant Avenue near where looters burned the QuikTrip after Brown's death, is different.

The lot surrounding the boarded-up Ponderosa on West Florissant is completely empty, and its evacuation was less cordial, according to Shanon Hicks. Hicks sells T-shirts on the sidewalk outside the former steak house and was there when the police arrived around 12:30 p.m. Friday and told everyone to leave.

Update: According to a report from the St. Louis Post-Dispatch, Ferguson Police Chief Tom Jackson said the Lost Voices protesters on the former Ponderosa lot had been given six days notice to vacate per the owner's request.

"I'm going to say about ten cop cars and about twenty cops showed up," he says. "They brought three [flatbed] trucks and blocked the exits and stopped traffic. They went in the back and told everybody back there that they had to leave now. The people started to move and gather their things, and I guess they were taking too long. Police officers ordered the guys in the trucks to take their tents and stuff and put them in the back of the trucks. Then they pulled out and took their stuff someplace."

Ned Alexander, a member of the group Lost Voices -- which was protesting in Ferguson and staying on the Ponderosa lot -- says police took all his belongings when they cleared the site, including his clothes and shoes.

Alexander says he stopped working his jobs at Seoul Taco and at an auto-body shop to join the protests in Ferguson. The group originally camped out at the furniture store and at Red's BBQ restaurant before setting up tents at the vacant Ponderosa.

"They basically ambushed us," he says.

Two women, an 18-year-old and a 30-year-old, were arrested according to a press release from Hands Up United.

Back at the South Florissant Road protest site, Angelique Kidd, one of the Wurm lot regulars, says she doesn't blame Wurm at all for asking protesters to leave.

"Andy Wurm came out this morning and politely asked us to leave, just that it's been going on too long, and with the escalating violence [last] night, it was time," Kidd says. "And we told him we really appreciated him letting us stay as long as he did, and we respectfully moved."

Natasha Gray, who was sitting next to Kidd in front of the Ferguson Police Department Friday afternoon, is another Wurm lot regular. She too expressed gratitude toward Wurm, and she wants to make sure people understand Wurm did not kick them off his property.

"He politely asked us to move," Gray says. "We did not get kicked off. It was not like that."

Both Gray and Kidd spend most of their free time before and after work in front of the Ferguson police station. Kidd is normally a daytime protester and goes home to her husband and daughter at night. But Friday, she came back after her shift at the Ferguson Public Library and stayed well into the night, expecting the violence to escalate from Thursday. She felt an obligation to stop any destruction directed toward Wurm's building.

Jermell Hason, another regular on South Florissant Road, says he doesn't blame Wurm. "He gave us more than enough time. It's just time to move to a different location," he says.

Friday night, the Wurm lot regulars gathered on the strip mall parking lot next to Wurm's lot across Tiffin Avenue.

Gray says she doesn't see an end to the protests in sight.

"It starts with an arrest," she says.