High-Speed Fiber Internet Is Coming to the Loop 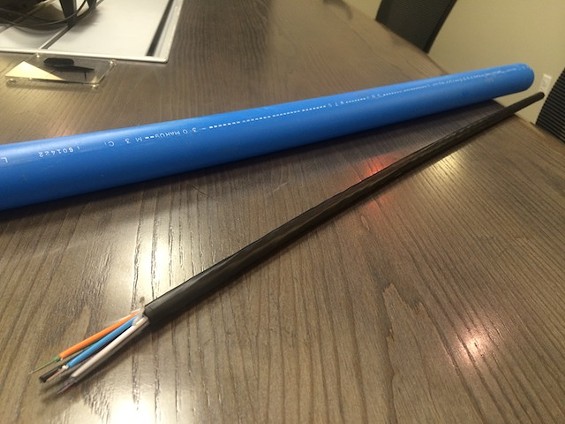 Gigabit Internet is coming to the Loop, thanks in part to the $43 million Loop trolley line. The 1,000-megabit Internet connection should be available within the next eighteen months.

David Sandel, the program director for the Loop Media Hub, the nonprofit company that will bring one-gigabit fiber Internet to the Loop, helped implement a similar plan for the Google Fiber initiative in Kansas City. When he attended an economic impact meeting for the Loop Trolley four years ago in St. Louis, a light bulb clicked on.

"I said 'look if you're going to tear up the streets, let's just install [the fiber] at the same time and save an enormous amount of money,'" says Sandel.

The Loop Media Hub will save about 90 percent of engineers' original estimate, which did not factor in the Trolley's role.

So what, you might be wondering, is Gigabit Internet?

Basically, it's Internet that's 100 times faster than a broadband or DSL connection. To put it into context, a one-gigabit connection is the same as 1024 megabits. Netflix suggests five megabits per second to stream a standard HD video, so someone connected to one-gigabit Internet could theoretically stream 204 Netflix videos at once.

The fiber Internet will also help with congestion.

"Some of these other providers in the neighborhood have massive congestion problems especially on Friday and Saturday nights," Sandel says. "We don't expect to have any."

The fiber optic cables will run under Delmar Boulevard and DeBaliviere Avenue from the University City Library to the Missouri History Museum -- about two miles.

"Each cable has 96 strands of fiber in it, so an enormous amount of information can go through there," says Sandel. "And it costs about a dollar a foot."

There will be public and private connection available when the fiber is eventually turned on. Businesses in the Loop can connect directly to the fiber via access points in the sidewalks. Loop-patrons will be able to connect with the mobile devices for free. Sandel predicts the service will cost about $80 per month for an apartment or small business. To compare, AT&T's U-Verse Internet costs between $29.95 per month with a speed of three megabits up to $64.05 a month with 45 megabits.

Sandel says there are two other programs in the works, which will be rolled out sometime after the fiber Internet. The first is an analytics program that collects data from all mobile devices.

"The program will keep a record of whatever people are doing on their mobile devices anonymously," Sandel says. "There will be no personal information in it, so shop and business owners can understand the commercial traffic that's going on and tweak their programs."

The second is a security umbrella "that would provide a base of protections against viruses, worms and hacking over the entire neighborhood," Sandel says.

But Sandel predicts the overall impact of super-fast Internet will have a ripple effect that goes beyond more fluid Netflix streaming.

In an economic impact study, "we determined that five to seven years out there would be $250 million worth of impact to the neighborhood," he says. "As soon as the fiber Internet is turned on, it's going to attract entrepreneurs and data oriented companies."

Other cities in Missouri that have one-gigabit fiber Internet include Columbia and Jefferson City. According to the Post-Dispatch, AT&T plans to outfit the city of St. Louis with one-gigabit Internet sometime in 2015.