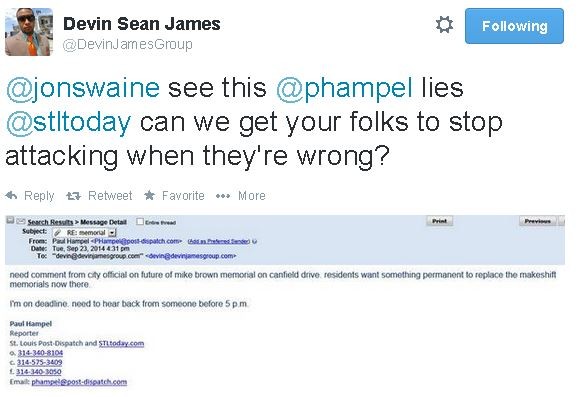 When Ferguson changed from a quiet St. Louis suburb to ground zero for a renewed battle over civil rights, the town quickly learned it needed a full-time public relations team to manage press inquiries and community outreach.

First, the city hired a bunch of white ladies. That didn't go so well. So the city shifted to Devin James, CEO of the eponymous, minority-owned firm the Devin James Group.

(UPDATE: Not anymore. Here's our story on that: Ferguson PR Rep. Devin James Fired (Sort Of) After Revelation He Shot, Killed Unarmed Man)

But James isn't just a public-relations CEO. He's also a clothes horse with an Instagram feed filled with pre-/-post-workout and workday selfies, each meticulously labeled with a host of hashtags. (Our favorites: #malemodel, #maturity, #communicationthatbenefitspeople.)

There's no separation between James' uber-hashtaged selfies/sub-tweets and his professional posts, and that caused a delightfully snarky skirmish between him and a St. Louis reporter on deadline.

It all started with this very characteristic tweet from James:

Paul Hampel, a political reporter for the St. Louis Post-Dispatch and the winner of the Riverfront Times Best Newspaper Reporter 2013 award, seemed to think James was focusing too much on #werk and not enough on work, namely connecting Ferguson officials with the media. Two nights before that tweet, Ferguson protesters clashed with police, broke a window and set fire to a restaurant. The next day, James helped Ferguson Police Chief Tom Jackson release his watershed apology video.

So Hampel threw a little shade James' way -- a gutsy move seeing as how Hampel only started tweeting last month while on the scene in Ferguson. And when James tried to throw some shade back, things got interesting.

@phampel so you're admiring the way I dress because #Ferguson is 1 of my accounts? What's the point here? SMH journalism at its finest lol

.@DevinJamesGroup You haven't managed to get 1 phone call or statement returned to me Re: #Ferguson but you're looking great! #priorities

James tries two tactics in response. First, there's the "I don't have time for this nonsense because I'm a CEO, son" approach:

Then he opts into the "Who the f**k are you to tell me how to do my job" approach.

@phampel your deadlines aren't mine u email me usually less than an hour before u need something. Yesterday at 430 for a 5pm before CM

@phampel so don't say my priorities aren't in order. Stop procrastinating and give us a better window this is a high demand assignment SMH

James should probably have stuck with his "I'm the boss" defense, because Hampel isn't about to let James accuse him of procrastinating.

LIE: Twice gave you multi-day notice: MT "@DevinJamesGroup: your deadlines aren't mine u email me less than 1 hr before u need something."

Things heat up a bit when Jon Swain of the Guardian joins in.

@jonswaine Ferguson could not have chosen a more tone-deaf spokesman.

@jonswaine your boy @phampel isn't being honest. Ask any reporters who I have worked w/ we R timely when given enough time based on request

@jonswaine see this @phampel lies @stltoday can we get your folks to stop attacking when they're wrong? pic.twitter.com/5QJnsBFf23

Again, Hampel was having none of it, and his colleagues at the Post-Dispatch started to notice.

@DevinJamesGroup @jonswaine @stltoday That was a follow-up to my calls and emails on Friday! In 30 yrs, have never dealt with likes of you.

Wrong again. Got no email from you Fri MT "@DevinJamesGroup: @jonswaine @stltoday Paul check your inbox I responded to your request on Fri"

@phampel It could be that a fashion-forward guy like @devinjamesgroup has taken notice of your wardrobe.

@OldSport You mean both of my dress shirts?

James doesn't seem to care, either about sniping with a reporter in public or about haters in general.

The moral of the story?