St. Louis is Sixth Most Segregated City in America, But Still Better than NYC, Chicago

That the St. Louis area is heavily segregated is not necessarily news. But a new study details how that segregation plays out and how racial inequality in St. Louis compares to other cities around the country.

Where We Stand, a study conducted by the East West Gateway Council of Governments, found the St. Louis metropolitan area is the sixth-most segregated area in the country based on several social, economic, and health factors. For St. Louis, the study focused almost exclusively on black and white populations, due to low numbers of other race populations.

A major factor in the study was the disparity in education. Overall, St. Louis ranks 18th in high school diploma attainment, but blacks are twice as likely than whites to not have a high school diploma. That trend continues onto college, with 17 percent of blacks having a Bachelor's degree, compared to 33 percent of whites.

Jobs and income were major factors in the study. Blacks are almost as likely to be in the labor force as whites (62.6 and 66.9 percent, respectively), but they are more than twice as likely to be unemployed (12.7 percent to 5.1 percent).

With lower job rates, it naturally follows that lower income and higher poverty affects the black population in St. Louis at a more substantial rate than the white population. And that difference has actually worsened over the past 30 years.

Over the past twelve years, income levels have dropped for blacks, as well as whites. But white median income has remained close to twice that of black median income, and the disparity has risen slightly over the past three decades. 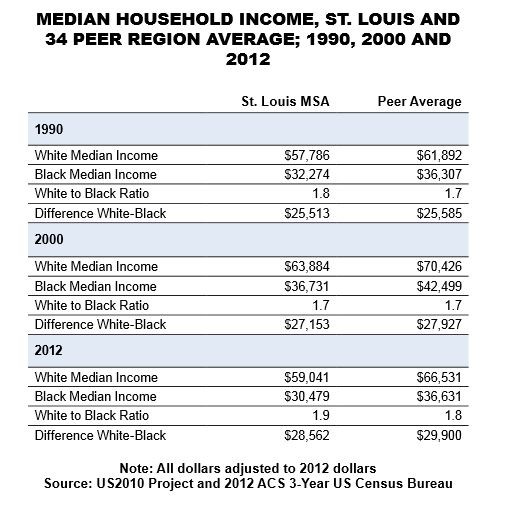 In this category, St. Louis ranks eighth in the nation.

Furthermore, black families are 3.2 times more likely than white families to be in poverty. According to the writers of the report, the disparity in poverty rates between whites and blacks was one of the most significant they found.

As for what to do to improve the quality of life for everybody in St. Louis, the study points to recommendations made earlier this year in another study, For the Sake of All. That study, which was conducted by Wash U: