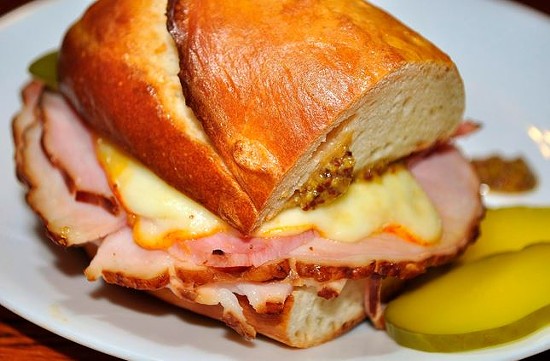 The prosecutor overseeing the grand jury investigation into Ferguson cop Darren Wilson's shooting of Michael Brown needed to get a few things off his chest yesterday, so he hopped on KTRS 550 to dispel the "misinformation" being spread by his loudest critics.

Public opposition to St. Louis Prosecuting Attorney Bob McCulloch's handling of the grand jury has sparked numerous Ferguson protest groups to demand his removal from the case, culminating in an attempted shutdown of Interstate 70 two weeks ago. Some of that ire has been fueled by the McCulloch's announcement that, in a rare move, he would enable the grand jury to review every available piece of evidence from the shooting.

"There's an enormous amount of the evidence that's being presented to the grand jury that normally wouldn't happen, but this case is so significant in our community," McCulloch told show host McGraw Milhaven.

Others, such as Washington Post columnist Dana Milbank, are suspicious of McCulloch's motivations, and consider his decision as further proof that he has no intention of allowing the grand jury to indict Wilson. In a September 12 column titled "Ferguson tragedy becoming a farce," Milibank referenced the well-worn adage about a prosecutor's power over grand juries: "A grand jury will indict a ham sandwich if a prosecutor asks it to. But the opposite is also true. A grand jury is less likely to deliver an indictment -- even a much deserved one -- if a prosecutor doesn't ask for it."

McCulloch called out the Washington Post by name during yesterday's KTRS interview. He shrugged off the sandwich metaphor as a "silly argument."

"Well, an unethical, irresponsible prosecutor who represents the evidence in such a skewered fashion can indict a ham sandwich, or anything else. But at some point that prosecutor would have to stand in front of a judge and jury and prove beyond a reasonable doubt that the ham sandwich committed a crime."

He also insisted that isn't sabotaging a possible indictment by drowning the grand jury in an ocean of videos, photos, witness testimony, ballistics and other evidence.

Rather, like a normal criminal trial, he said the grand jury can choose from various murder charges, ranging from first degree murder to involuntary manslaughter. That is, if they decide to indict Wilson.

"It's not that we're just throwing everything at them and letting them make a decision based on whatever they think. The law will all be presented to them to, that's part of our responsibility, to put all the law in there."

McCulloch, who's served as St. Louis County prosecutor for more than twenty years, also took the opportunity to clarify the timeline for the Darren Wilson grand jury hearing. Though a judge has agreed to extend the deadline until January 7, McCulloch expects the grand jury to be ready with a decision at some point between late October and early November.

"It's taken more time than we thought it would because of the number of witnesses that are coming in," he said. "Not a week has gone by that we haven't presented evidence to this grand jury."

Though McCulloch is not directly presenting evidence to the grand jury (two other prosecutors have that job), he can't seem to shake the perception that he's biased toward law enforcement.

"They keep bringing up my father who was killed in the line of duty," he told the Washington Post in a recent interview. At twelve years old, McCulloch's father, a cop, was killed in the line of duty by a black man. "I lost a loved one to violence. The pain was because I lost my father. It didn't matter that he was an officer....It shaped my life. If anything, it made me a strong advocate for the victims of violence."

McCulloch has stated that he intends to release all the information from the grand jury investigation following the completion of the hearing, regardless of whether the grand jury chooses to indict Wilson. But even that promise hasn't seemed to improve his image, or, for that matter, the image of his associates, like St. Louis County executive candidate Steve Stenger.

McCulloch is credited with engineering Stenger's victory over longtime incumbent Charlie Dooley in the Democratic primary in August. Last week, Stenger was confronted by protesters at a St. Louis County Council meeting over his political ties to McCulloch, and the Justice for Michael Brown Leadership Coalition has called on St. Louis County residents to vote against Stenger in the November general election.