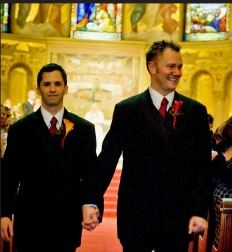 Opening arguments begin today in a landmark case brought by the ACLU and ten gay couples who want Missouri to recognize their out-of-state marriages.

Gay marriage has been illegal in Missouri for ten years, after voters approved a Constitutional amendment defining marriage between one man and one woman. The state will have to defend the amendment in court, but if Judge J. Dale Youngs rules in favor of the gay couples, it would mean another step toward marriage equality for LGBT couples.

Update, 2 p.m. - After opening arguments, the judge promised to return a ruling on the case soon since the ruling will almost certainly be appealed, Tony Rothert, legal director of the ACLU of Missouri says. A verdict could come down as soon as today.

"Our courts and our society have discarded, one by one, marriage laws that violated the Constitution's mandate of equality, such as laws that denied married women legal independence and the right to make decisions for themselves," says Tony Rothert, legal director of the ACLU of Missouri. "History has taught us that the vitality of marriage does not depend on maintaining such discriminatory laws. To the contrary, eliminating these unconstitutional restraints on the freedom to marry has enhanced the institution."

The ten couples, who are already married, are fighting for legal protections -- like the right to share a room in a nursing home, or reflection of marital status on a spouse's death certificate -- that they would have in states like Iowa, Illinois and Washington, where gay marriage is legal.

One of the ten couples is Alan Ziegler, 42, a physical therapist, and LeRoy Fitzwater, 43, an engineer, who married in California in 2008 and moved to St. Louis last year.

"We moved from California to Missouri knowing that essentially we'd be divorced when we got here," Ziegler told Daily RFT when the lawsuit was filed. "When our parents travel from state to state, no one questions their marriage. We want our marriage protected like our parents' marriage."

Ziegler, who has been with Fitzwater for thirteen years, recalls that just a few weeks before moving to Missouri, his husband had an emergency appendectomy in California.

"I was able to go in with him to the ER, talk with his doctor and Alan through it," he says. "In Missouri I wouldn't be allowed in. I would just be some guy who dropped him off."

The other couples include:

After the case starts, supporters are gathering for a rally at the Jackson County Courthouse with speeches from National Campaign Director for Freedom to Marry Marc Solomon, ACLU of Missouri, Kansas City Mayor Sly James, PROMO, Human Rights Campaign - Kansas City and plaintiff couples from the case.

Seventy-five faith and clergy leaders have pledged support to the married couples, according to PROMO, a statewide LGBT organization.

"As a Christian pastor, I support marriage equality not in spite of my faith but precisely because of it," says Reverend Phil Snider from Springfield. "Christ teaches that nothing is more valuable in a relationship than dignity, respect, mutuality and love, and I believe this holds true across all boundaries, including ones related to sexual orientation and gender identity."