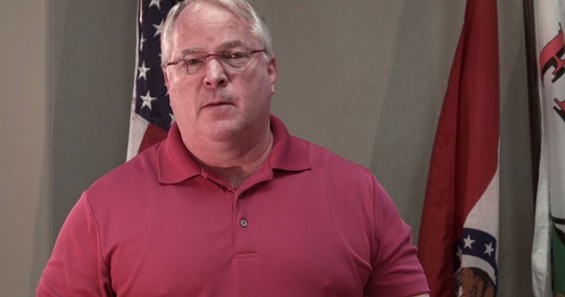 To explain how sorry he is, Jackson released a video apology wherein he speaks directly to the family of Michael Brown, the unarmed teen shot dead by one of Jackson's officers last month, and to the protesters who clashed with police after Brown's death.

"Please know that the investigating police never intended disrespect to Michael, to the Brown family, the Canfield neighborhood or the African American community," Jackson says. "If that is the way it appeared to you or anyone else at the time, I personally apologize for that."

See also: The Mayor Cares About Black People and 17 Other Clarifications from Ferguson City Council Not everyone was impressed with Jackson's mea culpa.

Chief Jackson's apology to the Browns and the St. Louis community shouldn't be in the form of a scripted video, but in a resignation letter.

As many of you know, my name is Tom Jackson and I'm the Chief of Police for the City of Ferguson. The unfortunate happenings in our city over the past month have not only sent shocks through our community, but all around the world. Overnight, I went from being the Chief of a suburban police department of approximately 50 officers; to being part of an international conversation about racism and issues of equality and how policing fits into that discussion.

As the Chief of Police in Ferguson, I want to be a part of that conversation and I want to be part of the solution. But, before we can participate in any further discussions about broader issues, I want to say something about the one single thing that brought us to this point - the death of Michael Brown.

I want to say this to the Brown family: no one else can know the pain that you feel. Personally, I am truly sorry for the loss of your son. I am also sorry for the time it took to remove Michael from the street. You have every right to be angry and upset. The time that it took involved the completion of the work of the investigators to preserve physical evidence and determine the facts, but four and half hours was simply too long.

Please know that the investigating police never intended disrespect to Michael, to the Brown family, the Canfield neighborhood or the African American community. If that is the way it appeared to you or anyone else at the time, I personally apologize for that.

There were many people who were upset about what happened, who were grieving the loss of Michael Brown and who came to peacefully protest in Ferguson. Unfortunately, there were others who had different things in mind. I do want to say that I am sorry to any peaceful protestor who believes that I didn't do my best job of protecting people and supporting the Constitution and everyone's First Amendment rights to peacefully protest and publicly grieve here in Ferguson. The right of the people to peaceably assemble is what the police are supposed to protect. If anyone who was peacefully exercising that right is upset and angry, I feel responsible for that and I am sorry.

I am also aware of the pain and the feeling of disrespect that is felt among many members of the African American Community of Ferguson. This City belongs to all of us and we are all part of the same community. It is clear that we all have much work to do. As a community, a city and a nation, we have real problems to solve, not just in a Ferguson, but in the entire region and beyond. For any mistakes I have made in any of this, I take full responsibility. It is an honor to serve the people of the City of Ferguson as Chief of Police. I am now and will continue to cooperate in any investigation. I will be ready to help if you will allow me to be part of the change that helps the City to move forward.

Thank you and I want to again apologize to the Brown family.