A St. Louis County judge sentenced two of the three men who killed a pizza-delivery driver to thirteen years in prison Monday.

Chester Woods, 22, and Davionte Williams, 20, pleaded guilty to robbing and murdering 22-year-old Imo's Pizza driver Daniil Maksimenko in May 2012, and now they're sentenced to thirteen years behind bars.

Maksimenko, who had been working at the franchise for several years, didn't even make it out of his car in front of a home in the 2100 block of Erick Avenue in Hillsdale before his killers shot him in the head and stole the pizza. 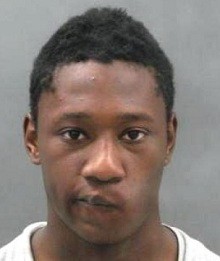 Woods, whose address is listed in court records at the St. Vincent Home for Children, and Williams, of the 4200 block of Cleveland Avenue, were sentenced after pleading guilty to first-degree armed robbery, second-degree murder and two counts of armed criminal action.

Woods and Williams had help in their deadly heist, and a third man charged with the killing will face sentencing on October 8. Shermell Crockett, 22, entered a "blind plea," which means pleading guilty without a set deal with prosecutors.

Six months after Maksimenko's murder, another Imo's driver was shot to death in Dellwood. Brian Johnson, 39, of Spanish Lake, was dead when police arrived, and three pizzas and a cell phone were stolen. Seventeen-year-old Earon Rivers from north St. Louis County was charged with the murder.