Over the past 45 days, since 18-year-old Michael Brown was shot and killed by a police officer on Canfield Drive, a huge memorial of stuffed animals, T-shirts, posters, photographs, cards and other items grew in two places -- in the middle of the street where Brown fell and died, and attached to a nearby electrical pole.

Early this morning, the tree of stuffed animals that sprouted at the pole went up in flames, eventually reducing the giant pile to black ashes. 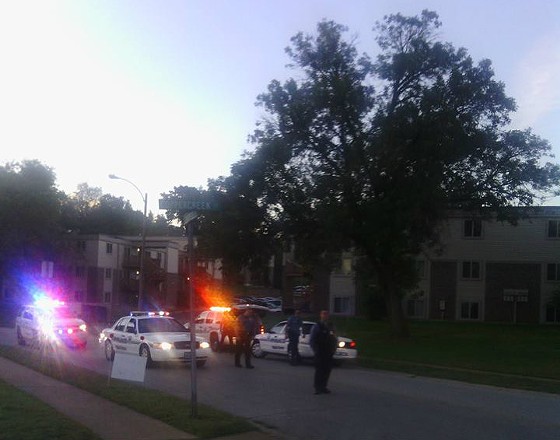 The fire is clearly not helping frayed nerves in the neighborhood, and though there are no details yet on the cause, residents were already suspicious that it was set intentionally and angry at the cadre of Ferguson police officers who arrived on the scene first but did not put out the blaze. Ferguson firefighters arrived and ultimately extinguished it.

Update 11 a.m.: Here is the statement from Chief Jackson:

We're all saddened by the fire that was reported at one of the Michael Brown Memorials this morning and are trying to obtain as much information as possible to determine what happened. At this time the cause is unknown.

To anyone who believes we didn't do everything in our power to put this fire out I want to apologize and let you know that was not the case. Some of our police cars are equipped with an emergency kit that includes a fire extinguisher and Sgt. (Harry) Dilworth was first on the scene and attempted to put the fire out but couldn't so he alerted the Fire Department and they ultimately put out the fire.

Anyone who has any information or videos please reach out to us as this will help as we investigate this incident.

A spokesman for the city clarified that Sargent Dilworth had a fire extinguisher and tried to put out the flames that way. Mull confirmed to Daily RFT earlier this morning that he did witness one officer attempting to put out the fire.

Piaget Crenshaw, one of the key witnesses to the actual shooting of Brown, posted this video shot from her Canfield Drive apartment balcony:

"Who would do some shit like that?" she said on the video.

Mull, who knew Brown and his family, said people in the neighborhood are already assuming this was arson and dismissed the idea that the flames could have ignited from one of the candles that are sometimes seen at the memorials.

"The candles are usually lit in the middle of the street at night time and they're usually put out," he told Daily RFT. "It's usually some watchers out there putting it out. The watchers usually go in at a certain time."

A photo Daily RFT snapped on September 9 does show candles placed at the bottom of the memorial, though they were unlit: 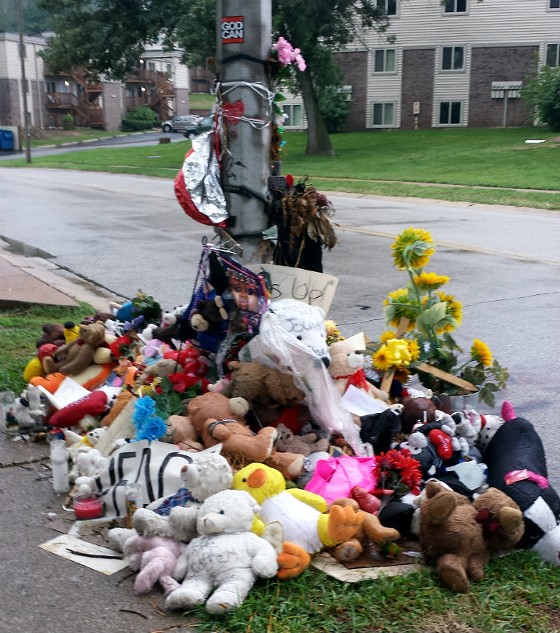 Other media reports showed candles in the smoldering debris:

Another look at smoldering #MikeBrown memorial & candles in middle of it from our @kmov video #Ferguson pic.twitter.com/VYZLDYe3EK

We reached out to city of Ferguson spokesman Devin James for the latest on the fire and the investigation, he said that Police Chief Thomas Jackson is currently on the scene and it's too early to say what could have caused the blaze. We asked specifically if the police officers who arrived first are permitted to put out a fire before the arrival of the fire department, he says he'll get back to us with those answers.

Despite the anger and frustration, neighbors are already rebuilding the memorial, bringing out new signs and toys. Scroll down for more images, and updates to this breaking story are still coming. Stay tuned.

No police in sight. #Ferguson pic.twitter.com/flam62Crqs