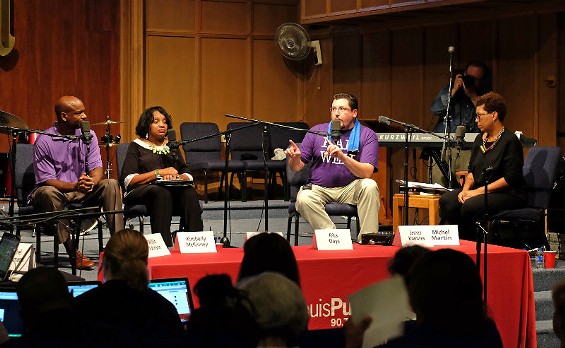 What are you doing tonight?

If you're closely following the aftermath of Michael Brown's death, you may have planned on attending the first of five town hall meetings in Ferguson. After all, this first meeting, with a program billed as "addressing misperceptions about the city of Ferguson," seems pretty interesting.

There are plenty of serious concerns -- sorry, "misperceptions" -- St. Louisans still have about the city where an unarmed teen was shot to death by a police officer and left in the street for hours before civilian protests were met with a heavily-militarized police response, and Ferguson Mayor James Knowles says he wants to address as many as he can tonight. "We wanted to begin our dialogue with the community by clearing up the misinformation that is circulating so they know exactly where we stand on things with full transparency," says Knowles.

But the "community" Knowles wants to be fully transparent with with means Ferguson residents only. As of Friday, reporters, protesters and residents of other cities were barred from the meetings.

UPDATE: There are now two meetings, not three. Ferguson residents only are invited to the meetings at Wellspring Church and Our Lady of Guadalupe Church. More details below. End of update.

The news that non-Ferguson residents are excluded came as a surprise days after the city sent out a press release to news outlets across the region detailing the meetings. While the releases invited "all Ferguson residents," it made no indication that anyone else would be stopped from attending. 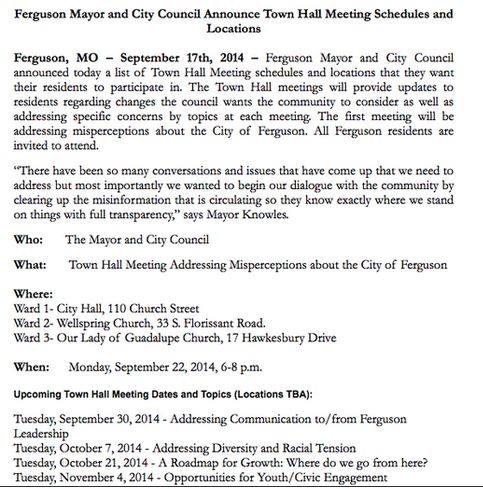 But things changed Friday when the U.S. Department of Justice Community Relations Service stepped in. The federal group's mission is to help communities like Ferguson resolve disputes about race, color and national origin -- which apparently means sometimes moving formerly-open meetings behind closed doors.

Devin James, a spokesman for Ferguson, confirmed to the St. Louis Post-Dispatch Friday that the U.S. Department of Justice committee wanted to keep reporters out of the town hall meeting so community conversations wouldn't be affected by news coverage.

"It allows us to have a more true dialogue," James tells the Post-Dispatch. "It's for the benefit of the community."

The town hall meetings aren't like regular city council meetings, which state law dictates must be open to the public and announced ahead of time. Officials won't be taking any votes or making any decisions, so they are not legally bound to make the meetings open to the general public or the media.

It's not yet clear how the Department of Justice will keep media and non-Ferguson residents out of the next five town hall meetings. It's up to the feds, not the city, says City Attorney Stephanie Karr to the Post-Dispatch.

If previous meetings are any indication, the Department of Justice may be trying to quash the demonstrations that have disrupted a Ferguson City Council meeting and a St. Louis County Council meeting lately. Both meetings were full of tense moments as "Hands Up, Don't Shoot" demonstrators interrupted official business by chanting, yelling and standing. See also: Michael Brown's Family Demands Officer Arrest at Tense Ferguson City Council Meeting

Even before blocking media from community meetings, officials in Ferguson and St. Louis County have had a thorny relationship with the press since the protests began -- starting early on when county officials blocked Alderman Antonio French from a press conference in downtown Clayton because he is a city official, not a member of the press. By then, French was nationally known for his Vine videos from the front lines of the protests -- living proof that the line between journalists and non-journalists blurs when nearly everyone has access to mobile publishing.

And as the protests slowed down into peaceful demonstrations, Missouri Highway Patrol Captain Ron Johnson was unapologetic for arresting journalists.

"Yes, we may take some of you into custody," Johnson said August 19. "But when we do take you into custody and we have found out you're a journalist, we've taken the proper action."

But the idea that the presence of journalists will taint a community conversation about race is absurd. One of St. Louis' most healing and revelatory post-Ferguson discussions about race came during a St. Louis Public Radio special hosted by National Public Radio's Michel Martin. The event was covered by journalists and organized by a news organization.

As for the rest of us? We'll be watching...probably on Twitter.