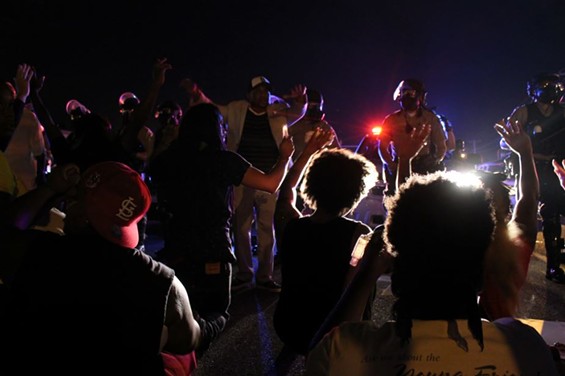 Forty-eight hours before cable news networks picked up the story of Michael Brown, the story exploded on Twitter with hundreds of thousands of people tweeting about the shooting, rioting and heavily-militarized police response.

A report from the Pew Research Center shows that in the first week after a Ferguson police officer shot and killed Brown, users posted 10.6 million tweets about Ferguson, including 8.3 million tweets using the hashtag #Ferguson.

Compare that to the Trayvon Martin case, where an unarmed, black Florida teen was killed by a community watch volunteer; in the month after Martin's death, the story generated 4.7 million tweets. There were more than 3.6 million tweets about Ferguson on its peak day, when President Barack Obama went on TV to talk about the standoffs with police, while the Martin story only saw 692,000 tweets on its peak day two years ago.

The story may have initially erupted on Twitter, but by day three of the unrest in Ferguson, cable news networks were also on board.

Three cable news networks covered the Brown story in prime-time: MSNBC, CNN and Fox News. MSNBC dedicated nearly twice as much on-air time to the Ferguson story as Fox News did, devoting five hours and 42 minutes compared to Fox News, which spent less than three hours on the story from Sunday, August 10 to Friday, August 15.

CNN jumped into the story on Tuesday, a day after MSNBC and Fox, after two nights of clashes with police. CNN covered the story for three hours and 59 minutes.

Coverage amped up -- on Twitter and on TV -- by Wednesday night, when police used tear gas during a fourth night of protests and two reporters from The Washington Post and The Huffington Post were detained. Between 7 p.m. and 11 p.m. Wednesday night, people were tweeting about Ferguson at an average of 4,500 tweets per minute and coverage on all three networks increased significantly.