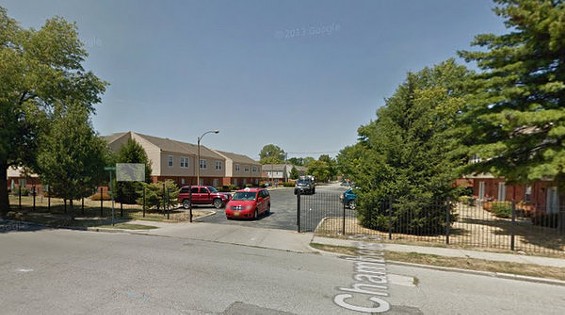 St. Louis Metropolitan Police are investigating a homicide after a fight in an apartment complex parking lot turned deadly and another nearby shooting just nine minutes later sent a twenty-year-old man to the hospital.

Orlanda Blanchard, Jr., 24, of the 3900 block of Olive Street, died Saturday night after he was shot multiple times in the torso in the parking lot of the Bristol Lane Townhomes in Old North St. Louis, according to police reports.

Police said officers were called to the apartment complex for a shooting at 6:40 p.m. Saturday. By the time they arrived, Blanchard was already in a car on the way to the hospital, where he would be pronounced dead.

Blanchard was standing in a group of men in the parking lot when he was shot, police said. The group was watching two men fighting when another man pulled out a gun, started shooting and struck Blanchard in the torso.

Just nine minutes after getting news of the Bristol Lane shooting, police were called to another shooting a mile south, in the 1400 block of North 7th Street.

Police said an unknown gunman shot at a twenty-year-old man, striking him in the buttocks before fleeing on foot. The victim is in stable condition in the hospital, and the suspect is on the loose.

Both shootings are under investigation. St. Louis city has had 97 homicides so far this year, compared to 74 homicides at this time last year.

Suspect: Black male in his 20's

Officers responded to a call for a "Shooting" at the above location. Upon arrival, officers learned the victim had been conveyed, by private vehicle, to a local hospital. Investigation revealed, the victim had been standing amongst a group of males on the parking lot of the Bristol Lane Apartments, when two males began fighting. Another male produced a gun and started shooting, striking the victim multiple times in the torso. The victim was placed in a private vehicle and transported to a local hospital where he was pronounced deceased. The investigation is ongoing.

Officers responded to the above location to meet the victim of a "Shooting". Upon arrival the officers were advised the suspect appeared from the gangway and began firing gunshots at the victim. The suspect fled on foot. Victim #1 suffered a gunshot wound in his buttocks. He was transported to a local hospital where he is listed as stable. Victim #2 and Victim #3 were not injured. The investigation is ongoing.