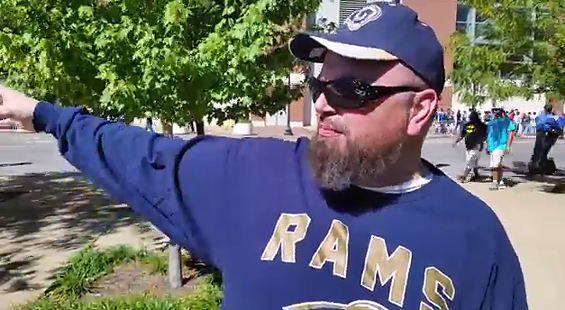 All eyes were on the Edward Jones Dome Sunday afternoon as the Dallas Cowboys matched the biggest comeback in the team's history, besting the St. Louis Rams' early 21-0 lead with two fourth-quarter touchdowns to defeat them 34-31.

Oh, yeah, and there was something about a protest about the death of Michael Brown.

News about Brown's death and the unrest in Ferguson has had a stranglehold on local news for weeks, but when protesters tried to take their cause to the gridiron, a plan to interrupt the game fizzled out.

So, did #NoJusticeNoFootball totally not work? This is getting very discouraging. Any thoughts? Cc @msugrl33 @OpFerguson

A few dozen protesters marched outside the stadium before kickoff, and the handful of demonstrators who made it into the game tried chanting without much luck or notice from nearby football fans.

Protesters then moved their demonstration to the St. Louis Cardinals game at nearby Busch Stadium. Some organizers said the first protest at the dome was a "decoy" to distract police while the real protest happened at the baseball game, mostly in front of Ballpark Village.

#Ferguson protestors in the bleachers pic.twitter.com/xAZtVHdGlo

Pics of us inside Busch protesting #JusticeForMikeBrown #Ferguson risked arrest going in&we turnt it up shout us out pic.twitter.com/vXZYjxeJgO

Two attempts at protests inside the stadium were quashed, and the game ended without any protesters arrested in or outside the stadium, according to the St. Louis Post-Dispatch.

Protesters last major attempt at disruption -- a planned shutdown of Interstate 70 -- was stopped by police on September 10.

Umar Lee, a St. Louis American writer and taxi driver who has been actively demonstrating in Ferguson, originally called for protesters to shut down the game and for Rams ticket holders to donate tickets so protesters to get in.

"There is no business as usual in St. Louis until there's justice for Mike Brown," Lee says in a YouTube Video four days before the game.

Protesters were seen outside the Dome and waiting in line to get in, and just like during the Ferguson riots, some were live-streaming video of the protests to come. But by the time the Rams and Cowboys were ready to square off, Lee came out with a new video message with a completely different tone.

In the video, Lee stands outside the Dome and says St. Louis, the county and the Rams are all "on probation."

"Because there are children out there, because there are families, we've decided to be merciful and compassionate and give the Rams permission to have their football game," Lee says. "So they do have our permission, but they are on probation."

Lee did get inside the game and chant about Brown's death:

Well Rams. Another rebuilding year I guess. At least it was an exciting game and I got to chant for #MikeBrown and educate inside dome

Not all the demonstrators seemed to think Operation #NoJusticeNoFootball seemed like a failure. One organizer says she believes the movement kept football fans away from the game in protest.

This is the smallest crowd I've ever seen for a Cowboys regular-season game. I've seen bigger crowds at Texas high school playoff games.

Thank everyone who made #NoJusticeNoFootball a great success. The youth are our future but first have to live and not be murdered in street