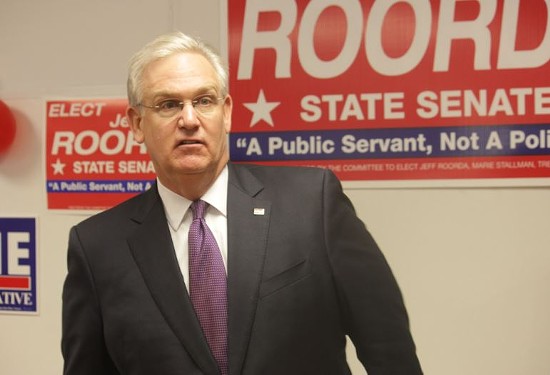 Roorda is running for a seat in the state senate, and he's leaning heavily on his record as a defender of law enforcement to get there. He currently serves as the business manager for the St. Louis Police Officers Association, where he also helps oversee Shield of Hope, the charity behind the recently-deactivated GoFundMe campaign for Ferguson cop Darren Wilson.

"You've seen a lot of leaders go through that Senate seat. It's been a voice in the Missouri Senate, for working people, for education, to make sure that folks follow the rule of law. Jeff Roorda fits right in there," said Nixon, addressing a modest crowd gathered at Roorda's campaign headquarters in House Springs, some 30 miles southwest of St. Louis.

Tuesday was a busy day for Roorda. Just hours before his joint campaign rally with fellow Democratic state representative Michael Frame, Roorda had warned St. Louis aldermen during a hearing that the city cannot purchase body cameras on a whim. By law, any decision related to police equipment must go through the collective bargaining process with the police union, which Roorda represents.

During the hearing yesterday morning, public safety director Richard Gray revealed the estimated price tag for outfitting the city's police officers with body cameras -- $1.2 million, but that number doesn't include the $500,000 to cover labor and maintenance costs.

"My basic point was that we've got a union here," Roorda told Daily RFT while awaiting Nixon's arrival at the campaign rally. "We have not said once that we don't want body cameras. We just said we want a place at the table to discuss how and when they'll be used. We expect the city to abide the law and negotiate with us."

But Roorda's misgivings about body cameras -- and police oversight in general -- go much deeper. He was criticizing the practice of recording police officers long before Michael Brown's shooting sparked popular demand for on-duty officers to wear body cameras. The troubling ambiguities that surround Brown's death haven't changed his mind, either.

"All we know about Ferguson is that officer Wilson was tried in the court of public opinion," said Roorda, who disagrees with those who argue the cameras would help protect citizens from excessive force by police.

In fact, Roorda has been pushing for less transparency in Missouri's police departments.

Earlier this year, Roorda sponsored a bill that, if passed, would have amended Missouri's Sunshine Law to prohibit police departments from releasing "any record or document regarding internal investigations by law enforcement agencies into the fitness and conduct of a law enforcement officer." The bill would also seal the name of police officers involved in shootings unless the officer has been charged with a crime as a result of the shooting.

"We ought to just worry about getting the truth of the matter," Roorda said, "and not just saying that cameras better protect the citizens. The citizens are not in danger because of the police. The citizens are safe because of police, and they will be less safe if we continue down this path of handcuffing police."

Continue for more of Roorda's opinion about what might be an acceptable use for body cameras, and also his troubling history as a police officer in Arnold

Roorda admited that he sees potential in body cameras as a way of exonerating officers who are falsely accused of misdeeds in the field. However, the example he chose support his point was the shooting of Kajime Powell, whose death was filmed by a bystander with a cellphone, not by a police-issued dashboard camera.

In any case, Roorda sees the push for body cameras as a way of harassing officers who commit minor infractions, like rolling a stop sign or not buckling their seat belt. He opposes the use of body cameras for the same reason.

"Our experience with the dashboard cameras has been that they haven't been used to find out the material facts of the situation. They've been used to pile petty discipline on our officers," he said.

But what really bothers Roorda is that all this money could be put to better use. Instead of body cameras, he suggested using the funds to raise officer salaries and upgrading or replacing existing police equipment.

"Our guys make $9,000 less than the average in the St. Louis region. We just went through collective bargaining where they told us they didn't have the money to bring us up to the average salary, yet they have two-million dollars to spend on body cameras? We've got police cars that have 150,000 miles on them, have the wheels falling off. We have guns that are out of production and you can't buy parts for anymore."

Though Roorda is, by all accounts, a friend to the police, his own history as a cop isn't all that flattering. He spent eleven years as a police officer in Arnold before the department terminated him 2001. According to court filings from a later appeal, Roorda was accused in 1997 of trying to cover for another officer by filing a report containing false statements about a suspect's apprehension and arrest. That incident earned him a reprimand.

Four years later the department fired him after a dispute with his police chief over paternity leave grew heated. Roorda claimed that the chief verbally intimated him, but an audio recording proved that this claim, too, was a "false report."

Roorda went on to become Chief of Police for Kimmswick, a tiny city in Jefferson County with a current population listed at 157. He was elected to the Missouri House of Representatives in 2004. Now, he's got his eye on the Senate.

A small number of demonstrators showed up to crash the campaign rally. Local activist Stephen Houldsworth told Daily RFT that he came to peacefully protest Nixon's decision not to appoint a special prosecutor to the Darren Wilson investigation.

Houldsworth said he and five other protesters were holding signs and engaging in discussion with other attendees when campaign organizers and the property owner confronted the group. The other five protesters were eventually kicked out, but Houldsworth played nice, thinking that he would be able to ask Nixon about Ferguson.

But Houldsworth wasn't given any oppurtunity to ask Nixon questions. The governor's handlers informed Daily RFT that there was no time for questions from the press, either.

Instead, we asked Roorda what he would say to people who lost faith in police after witnessing the events in Ferguson. He insisted that officers act in the best interest of people's safety, and that it was wrong to burden cops with constant second-guessing.

"Our guys do things the right way, and when they make a mistake, they make a mistake because they're defending the lives and property of the people of St Louis," he said. "I think the record of law enforcement in this county is that we performed wonderfully in incredibly challenging circumstances."