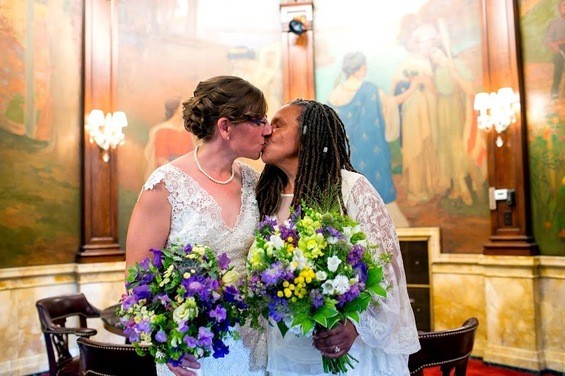 If same-sex marriage became legal in Missouri tomorrow, gay couples marrying in the state would bring in more than $36.6 million in three years, including $23 million in the first year alone, according to a new study.

The Williams Institute, a think-tank housed at the University of California-Los Angeles, looked to census data and patterns from states that have legalized gay marriage for clues about how Missouri would be affected financially.

The takeaway? Legalizing gay marriage in Missouri would attract millions of dollars in tourist revenue, the study says. The same goes for America as a whole; if all 50 states and the federal government legalized gay marriage, it would bring in $1 billion each year, according to the Congressional Budget Office.

Missouri voters banned same-sex marriage ten years ago, but that doesn't stop gay couples from getting married. Instead, they take their weddings (and their dollars) to a more tolerant state.

"Regardless of one's personal belief on the moral question of marriage equality, the economics of it are difficult to dismiss," says Sly James, mayor of Kansas City. "We can provide residents with more high-quality city services if the estimated $36.6 million impact of marriage equality is felt here.... More revenue is a good thing for our economy, and I'm supportive of events and efforts that bring in money to our community -- whether that be concerts, sporting events, conventions or marriage equality."

According to the 2010 census data for Missouri, 10,557 same-sex couples live in Missouri. The Williams Institute study estimates that 50 percent, or 5,279 couples, would get married in the first three years after marriage legalization.

Gay couples only have one-fourth of the budget typical straight couples spend on weddings, thanks to the heavy stigma around homosexuality and a lack of familial support, the study says. While a straight Missouri bride shells out $20,000 for her big day, a gay bride will probably spend $5,204. According to those figures, the study estimates that the more than 5,000 gay couples who marry in the first three years after legalization will contribute $27.5 million in direct spending.

But the brides and grooms aren't the only ones spending money on the big day. Out-of-town guests bring revenue to hotels, restaurants and other businesses. If the typical out-of-town guest spends $104 on food and lodging for a day and night, the Williams Institute estimates local businesses would see a $8.8 million boost.

With all that spending, Missouri would see a $2.75 million bump in tax revenue three years after legalizing same-sex marriage based on the state's 7.585 percent general sales or use tax, 4.225 percent sales tax and local taxes, the study says.

Those numbers could be even higher if tourists start coming to Missouri to get married. The study doesn't take into account couples in popular tourism-origin states, especially Texas and Florida, or neighboring states who may travel to Missouri because same-sex marriage is illegal where they live.

For every $38,802 spent in Missouri on leisure and recreation, one job is created. Based on the study's estimates that legal gay marriages will bring in millions of dollars, the think-tank says between 311 and 934 jobs would be created if gay couples could wed here.

With gay marriage still illegal in Missouri, same-sex couples spend thousands of dollars (and thousands of hours) filing for the nine legal documents they need to guarantee some of the legal rights that come with marriage.

Legalizing gay marriage would mean that money could go to wedding planners, license offices and cake shops -- not just lawyers and estate planners.