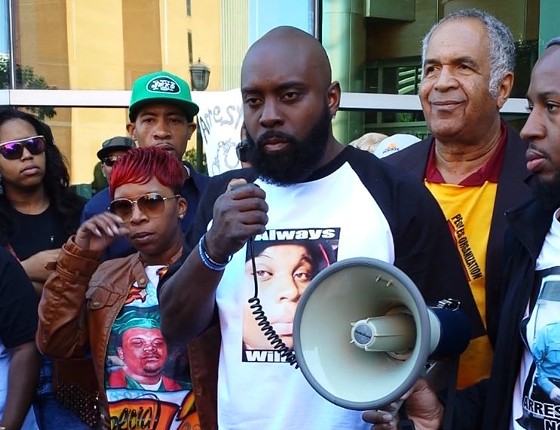 Just before a march that spilled into the streets of downtown Clayton and stopped traffic, the father of 18-year-old Michael Brown had pointed words for Ferguson Officer Darren Wilson. Michael Brown Sr. stood beside Lesley McSpadden, Mike Jr.'s mother, outside of the Buzz Westfall Justice Center and addressed the assembled crowd of about 100 supporters.

Click here for a complete archive of all of our coverage of Ferguson.

The march in Clayton was organized by Brown Sr.'s pastor, Carlton Lee, and was meant to highlight the fact that Wilson has not been arrested since shooting and killing Brown Jr. on August 9 in Ferguson.

"This family has endured 35 days of living hell, everyday that Darren Wilson is not behind bars," Lee told the assembled crowd. "There is a killer on the loose."

Lee emphasized that the media ought to put Wilson under the microscope the way it has Brown Jr., saying that he wants to know everything about Wilson, about his marriage, his juvenile records, whether or not he was drug tested in the aftermath of the shooting.

The family's locally-based attorney Anthony Gray also spoke briefly, to try to dispel the idea that the family is anti-police.

"That's BS," he said. "We have a problem with one officer on one day. This ain't about indicting every officer."

The crowd then began marching around the Justice Center, which houses the county's jail, chanting "arrest him now" and "we love Mike Brown." Quickly, the march spilled into the streets prompting the arrival of several Clayton police cars, but the officers allowed the march to continue, and tried to block and direct traffic around them.

The most gut-wrenching moment arrived when, in the middle of South Bemiston Avenue, the sun high above them, the procession halted and Gray announced they'd observe four and a half minutes of silence to represent the four and a half hours that Brown Jr. laid in the street before authorities removed the body. Brown Sr. groaned with emotion and soon tears were running down each family member's face.

After several laps around "Darren Wilson's future home" as Lee put it, the marchers convened again in front of the Justice Center. Lee asked that everyone attend the St. Louis County Council meeting which is set for Tuesday at 6 p.m. Brown Sr. thanked everyone for attending and the crowd slowly began to break up.

She said they are currently working on getting a website up called "Remembering Mike Brown" which will sell some of the t-shirts the family was wearing, funds from which will go to Brown Jr.'s six sisters and four brothers. She said she is also working to get Canfield Drive renamed "Michael Brown Street" and said the city of Ferguson just gave her contact information on how to make that happen.

"I will be calling on Monday," she said.

Louis Head, Brown Jr.'s stepfather, told Daily RFT that life goes on for the family, though it's not easy.