St. Louis Police Chief Spars with Aldermen Over Use of Deadly Force 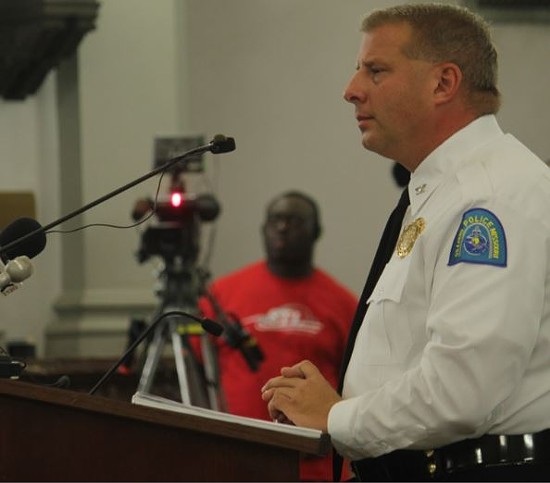 As he drove to the scene of Kajieme Powell's shooting on August 19, St. Louis Metropolitan Police Chief Sam Dotson couldn't shake the thought of Ferguson.

"The whole time I was thinking about the things that happened in Ferguson, and how to make sure the lessons learned in Ferguson were not lessons repeated here," said Dotson, addressing the assembled aldermen during a public-safety hearing at city hall yesterday. The remark drew bitter laughter from the packed audience; the city's highest ranking law-enforcement officer had just essentially admitted the Ferguson Police Department's handling of Michael Brown's shooting was so badly bungled that he considered it a textbook example of what not do in the aftermath of a police-involved shooting.

The crowd's bitter laughter -- along with some hisses and boos -- would be heard again over the course of the three-hour hearing, during which Dotson sparred with aldermen over the SLMPD's use-of-force policy. It was a strangely philosophical hearing, as aldermen such as Antonio French challenged Dotson to defend the use of deadly force against a man such as Powell -- a knife-wielding, mentally unstable shoplifting suspect who was still several feet from two officers when they opened fire on the 25-year-old, killing him. 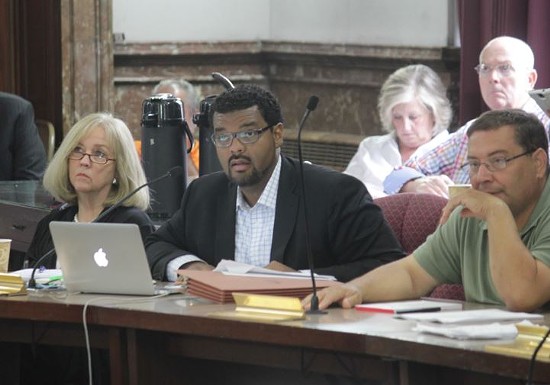 After Powell's shooting, Dotson had immediately traveled to the scene to address media and the community. The next day he released the 911 calls, surveillance footage and a cell-phone video of the shooting filmed by a bystander. At the hearing yesterday, activists set up a projector in St. Louis City Hall's rotunda and played the chilling video on repeat.

The hearing had been called for Dotson to explain the details of SLMPD's use-of-force policies. In Powell's case, witnesses say, he was pacing and muttering in front of the Six Stars Market in Riverview, where he had just stolen two energy drinks. Two white police officers arrived, and Powell approached them and began yelling "Shoot me, kill me now."

According to SLMPD policy, a suspect carrying an knife within 21 feet of an officer is considered a potentially lethal danger. The officers were legally justified in opening fire.

Aldermen asked Dotson multiple times why officers couldn't have shot Powell in the knee, or some otherwise non-fatal shot.

For reference, here is the three-point "philosophy" of SLMPD's use-of-force policy:

1. It is the policy of the Department that reverence for human life will guide officers in the use of deadly force. Deadly force will only be used when necessary to protect the lives of officers or other person; it is never justified solely to protect property.

2. Officers will use the least amount of force reasonably necessary to accomplish their lawful objectives while safeguarding their own lives and the lives of others. Deadly force will be a last resort, and will only be exercised when all reasonable alternatives have been exhausted or appear impractical.

3. An officer will take care that he/she does not, by his/her own actions, create a situation in which the use of deadly force becomes necessary.

Dotson said those policies are, "in substance, the same order I was trained on when I came to the academy in 1993."

While Dotson maintained that the SLMPD should be credited for acting transparently after the shooting, aldermen such as French -- who had been arrested during the Ferguson protests -- pointed to the video of Powell's death as evidence that it may be time to fundamentally reconsider giving officers so much power over life and death.

"There are two questions here," said French, describing the Powell shooting. "What is legally allowed? And what should have happened?"

"There are very few instances that we give the power to kill other human beings," French said later during the hearing. "That's a power we give as a society, and it's a power we can limit. We have given the police a great deal of leeway. If we think they are not exercising that force responsibly, I think it is our responsibility to review if we should give you guys that power."

Dotson countered that police officers, like any citizen, have the right to defend themselves if they feel their lives are in danger. He also cited the U.S. Constitution and U.S. Supreme Court precedents that enshrine an officer's right to use deadly force.

Powell's shooting is still under investigation, but there are changes coming to the SLMPD. Dotson is establishing a Force Investigative Unit to examine police shootings; the unit will operate separately from the homicide and internal-affairs divisions. A citizen review board is also in the works, and Dotson is seeking around $1 million to equip 900 officers with body cameras.

Alderwoman Sharon Tyus, however, refused to give Dotson a break -- especially after he remarked that, in the context of self defense and lethal force, the SLMPD has a responsibility to return its officers safely home.

"See, what I wanted to hear from you was, 'I want to see the police officers and citizens go home safely,'" she said. "You sound like an occupying force to me, rather than a police officer that stays here to protect the citizens."

January Ansa, a 32-year-old mom and St. Louis city resident, sat through the hearing in the audience with her husband. Echoing Tyus, Ansa says she grew frustrated watching Dotson dance around the systemic abuse and biases that actually define the relationship between police and St. Louis' black community.

Ansa recalled a time when she pulled into her driveway and was shocked to see a police officer rushing to her driver-side window, gun drawn. Ansa's one-year-old was in the back seat. After several terrifying minutes, the officer realized he mistook her for someone else.

"The police need to recognize there is deep-seated mistrust, and with cause," she added. "They have to be willing to be able to see, and I think there's a lack of wanting to."