Rachel Maddow to Claire McCaskill: You Could Be the Next President [VIDEO] 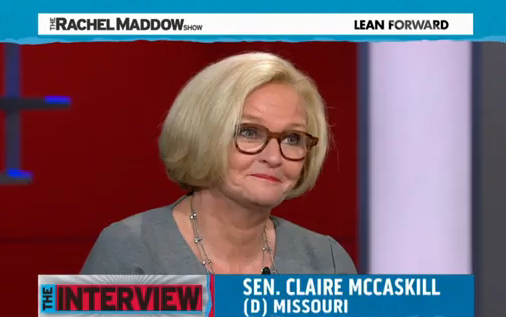 The drum beat for the 2016 campaign to put Hillary Rodham Clinton in the Oval Office has already started, but MSNBC host Rachel Maddow has another female candidate in mind: U.S. Senator Claire McCaskill.

Maddow put the Missouri senator on the spot during Thursday night's The Rachel Maddow Show, asking straight up: "Why shouldn't I be asking you if you're running for president?...If I were you, I would be running."

McCaskill has recently been translating her recent success overhauling the military's response to sexual assault into a similar project aimed at universities, which often have dismal and damaging responses to reports of student-on-student sex crimes.

During an appearance in Ferguson days after the death of Michael Brown, she received a standing ovation in a Ferguson church by calling for demilitarizing the police at a time when residents were still furious with Governor Jay Nixon's absence and delays.

"As the most centrist senator in the Senate, the way that you've run in Missouri, the issues that you have been interested in, the way that you've stepped into stuff that you didn't have to get involved in because you thought leadership was needed there. America's definitely ready for a woman nominee. If I were you, I'd be running. Why aren't you running?" Maddow asks. McCaskill quickly points to Clinton as the woman she's supporting for president, adding that her own jump into the contest would be like "a bull in a china shop."

Maddow backs off when she sees how uncomfortable questions about the presidency are making McCaskill, but not before Maddow repeats she thinks McCaskill could win.

But McCaskill stays firmly in Clinton's camp, pulling out an ol' Missourah colloquialism to get out of the hot seat.

"I'll tell you what, if somebody wants to 'betcha' on whether or not Hillary Clinton is a candidate for president, I'd take the bet," she says.