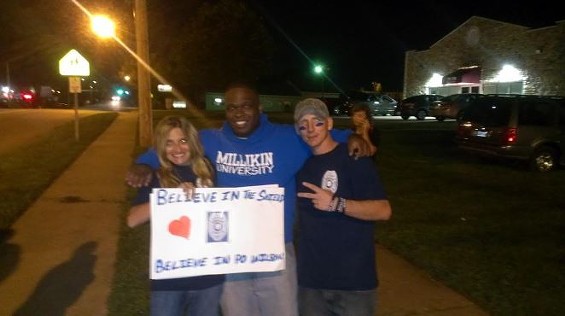 The large protests and demonstrations that were a result of eighteen-year-old Michael Brown getting shot and killed by police officer Darren Wilson have largely quieted down, but this past weekend showed that protests are still going on in the St. Louis area -- for both sides of the controversy.

In Ferguson, Lost Voices, a group of young Ferguson-area protesters who have called for an end to police brutality and vowed to permanently protest until Wilson is charged with a crime, held a sleep-in where supporters camped out all night in a parking lot behind Red's BBQ on West Florissant. Approximately 50 people, including children, participated in the overnight event, sleeping in tents that were donated to the cause.

"Now that the national media is gone, now that the rioting has stopped, I think what you see now is the real story of who's gonna help make change in Ferguson," said Ferguson committeewoman Patricia Bynes, who attended the late night event. "People want to be together. It's white and black and young and everybody playing a part and that's significant. So, this is what the real story is. When everybody else is gone, the cameras are gone, the shine is gone, this is what's really driving it."

For some young people, the sleep-in protest was an introduction to protesting.

"This is the first time I've done anything like this," said seventeen-year-old Brandi Shields. "I'm here for my nephew, kids of little ages, and Mike Brown."

See also: All of Riverfront Times' coverage of the Michael Brown shooting

But for others, the sleep-in was a way to continue the protests that began after the shooting of Brown on August 9.

"It's not about black and white. It's about blue: It's blue against civilians," said Toshiko Thompson. "[Police brutality] happens to our young black men on the regular and that's just a problem. It's like Jim Crow time."

Meanwhile, at the KT's Sports Bar in O'Fallon, about 30 miles west of the Ferguson sleep-in, a weekend-long fundraiser was held for Wilson, the Ferguson officer who shot and killed Brown.

"I believe Wilson is innocent until proven guilty," said Cathy Brown, who volunteered to sell t-shirts and bracelets for the event. "And I'm angry that he was tried and convicted on the streets of Ferguson."

Many Wilson supporters were troubled by the subsequent protests after the Brown shooting, especially the looting that took place on the first nights of the protests. There was also a strong feeling that the events have caused hatred towards white people.

"I've never done anything to harm them," said Brown. "But if I went to Ferguson, they wouldn't hesitate to harm me."

"The road [Brown] was going down, he was gonna be dead anyways," said a Jefferson County man who did not want to give his name. "You don't just go around pushing people around, strong-arm robbery, all that - it was a matter of time before it happened. It's just unfortunate it was somebody in law enforcement that did it. He could have went four blocks down and got shot -- they shoot each other constantly."

The Jefferson County man added: "Race has nothing to do with it. He was just a big thug."

In addition to personal opinions about the shooting, many Wilson advocates said their support for the officer is rooted in their confidence in the benevolence of police.

"When you watch a sporting event, do you root for the winner? Or do you root for the team before they win?" said a woman who did not want to give her name. "So if you support the police officer, does it matter if the verdict is in yet? You still support the person. I'm out here mainly because I have a lot more faith in the police department than to think he went out there and killed somebody in cold blood."

See also: Cop in Ferguson Tweets Lies to Justify Tear-Gassing Protesters in Their Own Back Yard

That faith in the police department was a stark difference between the two groups: Wilson supporters have it, Ferguson protesters do not.

The Department of Justice's announcement that it will investigate the practices of the Ferguson Police Department was welcomed by the Ferguson protesters, but still seen as inadequate for now.

"If they want us to have faith in the system and trust people who are out here to protect us, then we need to see change," said Thompson. "It started with this Mike Brown situation, but it's deeper than that. If you look online, it's all over the U.S. How are we to police other countries and we got our own problems here?"