The Fox Theatre Nominated for Best Restroom in America (PHOTOS) 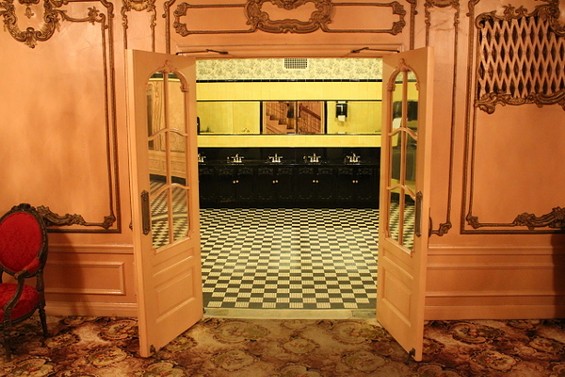 When Liberace, the piano-playing phenomenon with a penchant for sublime glamour, appeared at the Fox Theatre in 1982, he held a press conference in one of the dazzling theater's most elegant spaces: the women's bathroom.

Today, the Lower Ladies' Lounge and Puff Room is one of ten finalists for the America's Best Restroom Contest, but if the Fox's ritzy restroom is going to win, it'll need your vote.

See also: Pee Like Royalty at the Fountain on Locust

When the Fox opened in 1929, architect C. Howard Crane outfitted the luxurious bathroom in the 18th-century French Rocco style, complete with a carpet pattern known as "Versailles," elaborate ornamentation and a delicate color palette. The bathroom was restored in 1982 with the pastel pink walls, checkered tile floor and sleek black countertops patrons know today.

"Not many people expect a restroom to be so fabulous," says Megan Ketcherside, publicity coordinator at the Fox. "We are excited to share the elaborate design of our restrooms with people who may never have the opportunity to visit our theater."

The bathroom was originally modeled after the Beverly Hills home of actors Mary Pickford and Douglas Fairbanks, once one of the most famous homes in the world. The rest of the venue may be decorated in a style known as Siamese Byzantine, but the restroom had a style all its own.

If the Fox wins the coveted best bathroom award in the late fall, it'll join other Missouri businesses with crappers worth crowing about. The Fountain on Locust's art deco bathrooms won in 2010, and Branson's Shoji Tabuchi Theater won in 2009.

Want to help the Fox win the award for best bathroom in America? Go to the America's Best Bathroom Contest site to vote.