Storm Chaser Gets Coveted Shot of Lightning Hitting the Arch -- And It Strikes Twice! 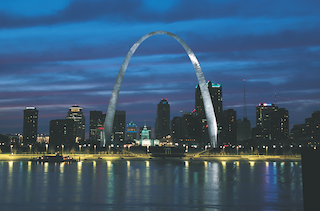 After years of hunting for the perfect shot, a St. Louis photographer took an electrifying video of the Gateway Arch getting struck by lightning last Wednesday.

Dan Robinson, the guy who caught the Arch's most recent encounter with lightning on film, was on a business trip in West Virginia as he monitored storms in St. Louis. He noticed the storms were "very lightning active," so when he saw one on its way to St. Louis, he packed it in early and headed for home.

Using a high-definition video camera, Robinson set up shop on Memorial Drive and waited, literally, for lightning to strike, though he didn't expect it would be twice.

Five lightning rods on top of the arch absorb the electricity from lightning strikes to protect it.

"The Arch is actually designed in a way that lightning doesn't do any damage," says Karen Bollinger, director of sales and marketing for the Gateway Arch. "It happens several times a year, even when people are up inside. Nothing shuts down. It just sounds like a firework going off. And then it's back to business as usual."

Robinson, a storm chaser and Web designer, has hounded the elusive lightning-hitting-the-Arch shot for four years.

"I've always loved storms. Lightning in particular has always fascinated me," he says. "This was just your common, garden-variety cloud-to-ground lightning strike, there was just more of it than usual."

It's possible to have ground-to-cloud lightning strikes also, Robinson says. But that only happens around skyscrapers and towers.

"High towers produce ground-to-cloud strikes because they're so tall, and they have a focused point electric field," Robinson says. "They wouldn't happen if the tower wasn't there, so it's a man-made phenomenon."

When it's hit, the Arch doesn't use the electricity for power or anything like that, Bollinger says. Lightning rods and the stainless-steel exterior provide pathways to the 60-foot-deep bedrock at the base of the Arch, and the lightning is carried away. No harm, no foul.