With each passing day, the patchwork system of tiny police municipalities serving St. Louis county appears more problematic -- and it's not only the breathtaking imbalance in court fines and bench warrants attracting scrutiny. Officers are finding themselves under the microscope as well.

Last week, three cops lost their jobs after video and social-media evidence revealed extraordinarily bad behavior, including one officer who pointed a rifle at protesters and threatened to kill them. Then, on August 25, news broke that the Glendale Police Department was suspending patrolman Matthew Pappert for writing a barrage of hateful Facebook posts, including one declaring that Ferguson protesters "should have been put down like a rabid dog the first night." He was fired on August 28.

But Pappert's name rang a bell for local blogger Steve Patterson. It wasn't a pleasant memory. 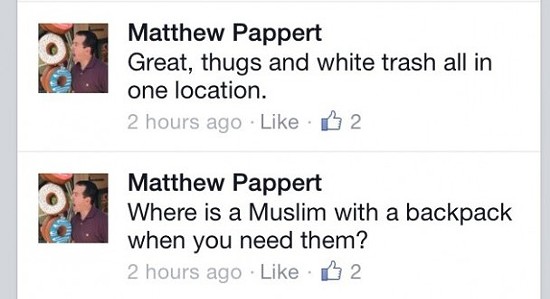 It turns out that Pappert and Patterson share a dozen or so Facebook friends, and Patterson had endured a previous social-media run-in with the recently fired Glendale officer.

Here's the setup: On July 11, Patterson -- who navigates the city by wheelchair and bus -- snapped a photo downtown of a parked St. Louis police cruiser blocking both a fire hydrant and bus stop. He posted the pic to his blog's Facebook and Twitter account, adding in the caption that he was forced to travel to an unobstructed bus stop two blocks away.

The blog's readers shared the photo, and it quickly hit Pappert's news feed. Patterson took a screen shot of the resulting comment thread.

See also: Cop in Ferguson Tweets Lies to Justify Tear-Gassing Protesters in Their Own Back Yard

Patterson later wrote that he became "furious" at Pappert's insensitive attitude and knee-jerk defense of the badly parked police vehicle.

"As a disabled person I don't need sympathy, but I do expect those working for the public to show empathy," he tells Daily RFT. "Instead he bragged about parking illegally."

That night, Patterson filled out a complaint form on the Glendale Police Department's website. He received no response. However, on August 23, Patterson watched a local news report about Pappert's suspension.

"I never heard of him before July 11, but I knew from what I saw on his public Facebook timeline, it would only be a matter of time before he got in trouble," he says. "I just didn't know it would happen so quickly."

Patterson tried again to contact the Glendale Police chief on August 23. This time, he received an apologetic response within the hour, and the police chief promised to investigate.

"I'm concerned about what police officers are posting privately that we can't see," he says. "This is why I think it's good for the police, elected officials, etc., to more closely represent the general population."

You can read Patterson's full account of his encounter with Pappert on his blog, Urban Review STL, a Riverfront Times Best Of winner for Best Blog.