Protesters Briefly Stop Traffic on I-270 Despite Michael Brown Sr.'s Request to Postpone 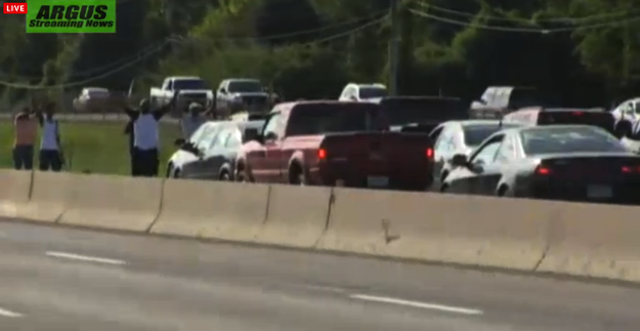 Despite calls to postpone a mass shut down of Interstate 270 yesterday, a few protesters halted traffic on the highway near West Florissant Avenue, the street that's been the site of demonstrations since the August 9 killing of Michael Brown.

Hours before the highway shutdown was supposed to happen Monday, Brown's father, Michael Brown Sr., along with other protest leaders -- Zaki Baruti, Anthony Shahid and Anthony Gray, the family's attorney -- announced a postponement of the protest. But a few people ventured out onto the highway anyway.

A group of protesters, with their hands raised, stood shoulder to shoulder on westbound I-270 around 4:30 p.m. to block traffic.

There might have been other attempts by drivers to block traffic on I-70 near Bermuda Drive in north county, and police responded to an accident in that area around 4:35 p.m., according to a Fox 2 report.

The postponement came at Brown Sr.'s request. He encouraged supporters to instead observe a four and a half minute moment of silence for his son.

The original highway shutdown plan was for motorists to stop in the middle of the highway for four and a half minutes to symbolize the four and a half hours Michael Brown's body lay in the street after Ferguson officer Darren Wilson shot him.

According to Fox 2, one possible date for the rescheduled highway shutdown protest is September 10.

Missouri Highway Patrol did not immediately return a call seeking information, but we'll update this post when we know more.