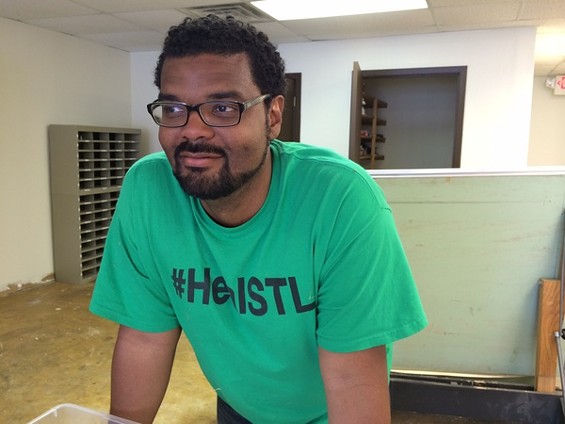 The nightly violent standoffs between police and protesters in Ferguson may have stopped, but the anger that fueled two weeks of unrest here -- anger at police, at elected officials, at oppression -- remains.

And if Ferguson police officer Darren Wilson isn't charged with a crime for shooting and killing unarmed teen Michael Brown, anger could again swell into chaos.

"If there isn't an indictment, we're going to see the same thing again," says Antonio French, a St. Louis alderman who has emerged as one of the leaders behind the movement for change and peace in Ferguson. "That's predictable. It's going to get bad."

But this time, community leaders won't be caught off-guard and "flat-footed," as French says, by the anger. By the time the grand jury decides on Wilson's fate five or more weeks from now, things will be different.

That's where Heal STL comes in. 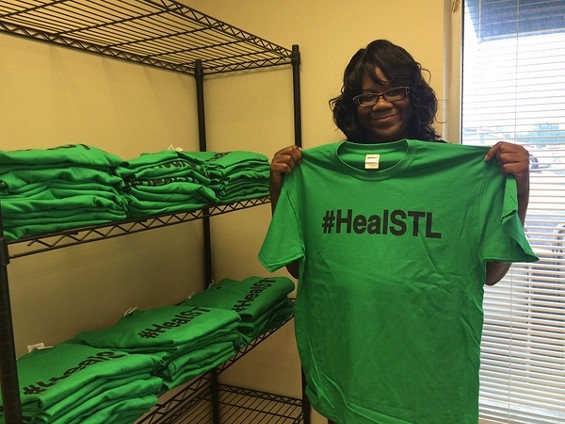 Heal STL has grown from a hashtag to a headquarters where community leaders, volunteers and would-be volunteers gather, organize, sell T-shirts and prepare for the change many hope is coming to Ferguson. French paid a six-month lease for the storefront at 9171 West Florissant Avenue and plans to re-up another six months when that runs out.

"It's an early thing for us to get our legs up under us...learn the streets here, learn the people," French says. "We've just got to get organized, that's what this is about right now. This is a place to share."

Technically, Heal STL isn't even "open" yet, but that doesn't stop the volunteers (and rap legend MC Hammer) from showing up to help.

John Stopple, a Kirkwood resident and retired doctor who graduated in the last class out of Ferguson High School in 1958, dropped in Thursday ready to fold Heal STL T-shirts, go on a grocery run or perform any other task the group needed. 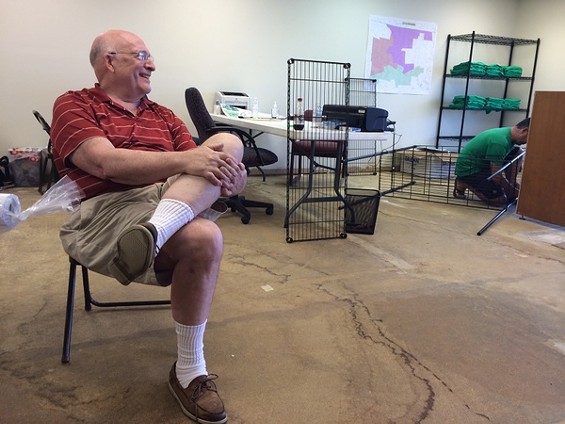 "I want to make a change," Stopple tells Daily RFT. "I was afraid that once the protesters left, everything would go back to the way it was. I'm just trying to push the other way, that's all."

Now that the group has a space, Heal STL is focusing on registering the 2,000 unregistered voters here, something French estimates will take about a month.

After voter registration comes voter mobilization -- a more ambitious, if nebulous, goal. Heal STL volunteers and the young people French plans to hire will check in with voters they register regularly, reminding them of upcoming elections. They'll also educate residents on how voting can bring change to Ferguson.

"It's a big effort that has to happen out here in north county and beyond," French says.

For now, the tasks facing Heal STL seem mundane: fill out the paperwork to become an official 501(c)(3) nonprofit, collect a database of volunteers, set up the cubicles, get some carpet. One person is in charge of building shelves, another of updating an Amazon wishlist so donors can help buy supplies until Heal STL opens up a bank account for financial donations. (Donors bought everything on the original wish list, including two iPads, within an hour of posting it, French says.)

But Heal STL's true mission goes beyond logistics. These are the people trying to redirect Ferguson's anger into peaceful, positive action -- and not into another eruption of gunshots and tear gas.

"There has to be a way to be heard without setting something on fire," French says. "We've got five weeks to figure that out."