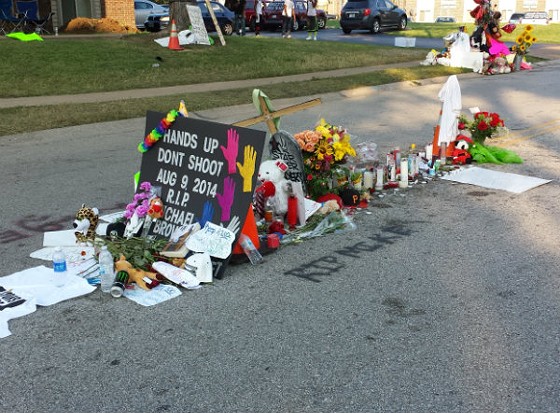 Updated 8/28/14 12:50 p.m.: A statement from the makers of the app which recorded the original video say they have authenticated the tape. Click through for the full release.

A newly discovered snippet of video from an unnamed Canfield Green resident allegedly contains audio of the gunfire that killed eighteen-year-old Michael Brown. Much has been made already about the number of shots heard -- about ten or eleven -- and the pause between the volleys, though the tape has not yet been declared authentic by the FBI or the St. Louis County Police Department.

However, Adolphus Pruitt, president of the local St. Louis NAACP chapter, says he believes the audio is the real deal. He says his office has acted as a liaison between the witnesses who are afraid to come forward for fear of retribution and the FBI agents investigating the case. That's how he met the man who made the tape as well as his lawyer, Lopa Blumenthal.

"I met at the attorney's office, and they played it and gave us a copy of our records," Pruitt says. "I'm convinced."

Read our complete coverage on Michael Brown and Ferguson here.

The video was purportedly shot around noon on August 9, when Ferguson police officer Darren Wilson shot and killed Brown. CNN obtained the tape first and aired it yesterday -- listen here:

Pruitt says the recording was made with the video-texting app Glide. One of the reasons he says he believes the recording to be authentic is that the app automatically time stamps each entry, and the date, time and location of the man's apartment where the video was made seem to add up.

Updated: The makers of Glide have authenticated the tape. Here's the statement we received from spokesman Chaim Haas (emphasis ours):

While tragedy is never good news, and our hearts go out to the family of Michael Brown, this incident underscores how technology is changing the landscape of not only journalism, but also criminology.

A Glide user living nearby (whose identity is being protected) was simply using the Glide app on their smartphone exactly as it was designed -- to instantly communicate with a friend through our real-time video texting service. Simultaneously, they also captured audio in the background of the gunshots allegedly fired at Michael Brown.

Because Glide is the only messaging application using streaming video technology, each message is simultaneously recorded and transmitted, so the exact time can be verified to the second. In this case, the video in question was created at 12:02:14 PM CDT on Saturday, August 9th.

We commend this Glide user for turning their Glide video message over to FBI investigators as possible evidence in this ongoing investigation.

"Our concern is: What was the pause? What occurred during the pause, what was going through the officer's mind in the pause," says Pruitt. "One, was there an ability for assessment and contemplation, and two, the fact that [Brown] was only hit six times and there was ten shots within this volley. What was going on? Where did those other shots go?"

For Brown's family, the pause is also significant. According to Brown's cousin Eric Davis, news of the tape's existence also shattered any hope of finding relative peace the day after the teenager's burial.

"He paused for about three to four seconds. I'm assuming that's when Michael went down on his hands," says Davis. "It's quite disturbing."

Daily RFT was unable to reach Blumenthal yesterday, but she allowed reporters from the Post-Dispatch to actually watch the Glide video as well as hear the audio.

Daily RFT also reached out to the makers of the Glide app. Spokesman Chaim Haas would not comment on the authenticity of the video, but wanted to clarify what the app itself is. Though the man in the tape clearly seems to be talking to a love interest, Glide is not a dating app, rather it's like a "video walkie-talkie." Users have to be friends to send video messages back and forth, which are transmitted instantly and watched in almost real time. All messages are stored in the cloud until a user deletes them. Though the company is based in Jerusalem, it has nearly 10 million stateside users, many of whom are young and "urban," Haas says.

Pruitt says the man who made the video wants to remain anonymous for many reasons, from the desire to avoid media scrutiny to a fear of retribution.

"I'm confident there have been death threats against both sides of this issue," he says. "What witness wants to be the subject of death threats?"