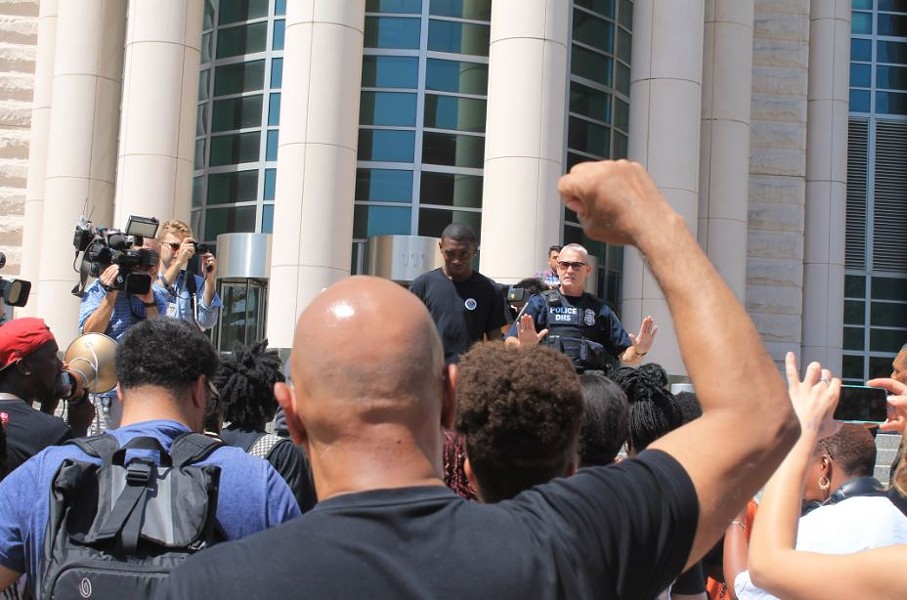 Approximately 150 protesters rallied in downtown St. Louis Tuesday afternoon to protest police brutality and announce a set of demands they want enacted by officials at the local and national level.

The demands announced by protesters centered largely on police reform and accountability. But they also included several direct demands related to the investigation of the Michael Brown shooting, including the "immediate arrest" of Darren Wilson, the Ferguson police officer who fatally shot the eighteen-year-old August 9.

"We are going to bring that gunman to justice, and I mean that," said rapper Tef Poe, a Riverfront Times contributor and a constant presence at the Ferguson protests since they began the day after the Brown shooting.

"If [Jackson] can come out every day and lie and construct stories when he said he's not in charge of the investigation in the first place, then why is he still on camera, lying every day?" said activist Taurean Russell.

Read all of our coverage on the death of Michael Brown here.

The protesters also demanded that broad reform measures to be taken, including changes in how police shootings are investigated, civilian review of those shootings and a rapid de-escalation of militarized policing during protests.

"What they're waiting on and banking on is for the cameras to leave to use some of this tear gas and rubber bullets to play Call of Duty in real life," Russell said.

At the national level, the protesters want the U.S. Department of Justice to conduct a nationwide investigation into the systematic police brutality and harassment of minority communities, as well as better transparency by requiring all police officers to wear front-facing cameras and for police departments to record race statistics in stops, arrests, killings and excessive-force complaints.

The rally was organized by Hands Up United, a coalition group that includes the Organization for Black Struggle and Missourians Organizing for Reform and Empowerment.

Hands Up United, which had several solidarity rallies across the country, according to its website, has two more events planned for this week. On Thursday, the group says, it will deliver 800,000 signatures to the White House requesting a full investigation into the Brown shooting and for implementation of police-accountability measures.

On Friday the group will hold the Black Lives Matter Ride, which will "bring concerned citizens from across the country into St. Louis, Missouri, as part of a national call to end state violence against Black people," according to the Hands Up United website.