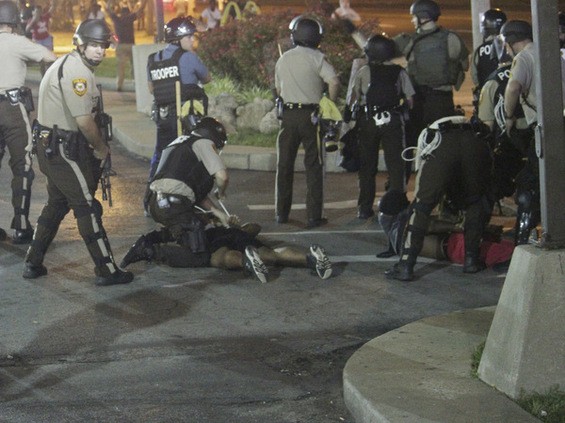 At a time when many are asking what the long-term solutions are to the social and criminal-justice issues being raised by the killing of Michael Brown, a coalition of legal experts and advocates have stepped forward pledging their services.

In a letter drafted and signed by 45 individuals from local law schools, firms and other service providers, the coalition has come together to "work towards changing the current situation of distrust and divisiveness." The letter lists several areas of concern, including the "nationwide problem of the death of, and violence against, youths in communities of color" and the policing of youth from those areas. As Washington University School of Law professor Mae Quinn points out, the shooting death of eighteen-year-old Brown all began as a traffic stop.

"Many of these cases stem from criminalizing normal adolescent behaviors that aren't otherwise criminalized except in communities of colors," she says.

Read all of our coverage on the death of Michael Brown and Ferguson by clicking here.

Included in the 45 signatures are professors from Wash. U. School of Law, St. Louis University Law School, the American Civil Liberties Union of Missouri, St. Louis Youth Advocate and individual law firms. One of the signed firms, the ArchCity Defenders, is already hard at work demanding that the city of Ferguson declare amnesty for residents who have warrants out due to unpaid fines for nonviolent offenses, such as unpaid traffic tickets (read all about this proposed amnesty here). Quinn says she is currently gathering signatures from the coalition to support the amnesty.

Here is the group's letter in its entirety, as well as the signatures:

Members of the Saint Louis advocacy community on recent events in Ferguson, MO

As members of the Saint Louis advocacy community, we represent faculty, attorneys and other service providers who, through our work, pursue justice in our region and beyond. First, we offer our deepest condolences to the family and friends of Michael Brown and to all who have been touched by this tragedy. We hope that through our collective efforts, we can all work together to heal and begin to receive answers to the many questions and concerns that we have about the events that transpired.

We are especially concerned about the following:

-- The nationwide problem of the death of, and violence against, youths in communities of color. Respect needs to be taught, exemplified, and reinforced.

-- The militarized policing tactics used against members of the community this past week, the myriad First Amendment violations, and apparent resistance to transparency and information sharing. We must begin to address and remediate these issues.

-- The need for police training and accountability concerning conflict resolution, use of weapons and tear gas, protection of constitutional liberties and rights, and appropriate levels of response that should be used in a variety of situations. We should not ignore improprieties, constitutional violations, and unjust deprivations of rights and liberty as we find or search for the right balance of order in our communities.

-- The need to work towards solutions regarding the underlying causes of racial, social, class-based and educational inequality, discrimination and division, as well as other causes that led to the frustration and distrust illustrated in Ferguson but are present throughout the region. Historic examples include social, educational and economic instability, and lack of employment and entrepreneurship opportunities must be addressed.

We hope that we can help address these issues and focus on solutions. We stand at the ready to engage in debate and dialogue, to offer legal and other assistance, and to otherwise support both individuals and the community at large as appropriate. By joining together, we can work towards changing the current situation of distrust and divisiveness to one of collaboration, cooperation and the promotion of justice.