Ann Leckie is living every first-time novelist's fantasy. Sort of.

Sure, her sci-fi epic Ancillary Justice destroyed the 2014 award circuit -- that was true before she traveled to London last weekend to attend the Hugo Awards ceremony. Ancillary Justice won that one, too, making the Leckie's novel the first to ever win the Hugo, Nebula and Arthur C. Clarke awards in a single year. Not even sci-fi master and Missouri native Robert Heinlein pulled off that feat.

The only problem is pressure. Leckie's next book, Ancillary Sword, is a direct sequel to her award-showered debut. And she still has to write the third and final book in the Imperial Radch trilogy.

See also: Is Ann Leckie the Next Big Thing in Science Fiction? 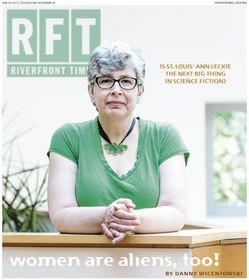 "This is kind of a scary place for your debut to be, and then waiting for the second one -- because how can it possibly live up to the reception of the first book?" says Leckie, a Shrewsbury native. She'll know if audiences accept Ancillary Sword soon enough, because it'll hit shelves in October 2014. Yet she is far more preoccupied with closing out the series.

"It's getting distracting for concentrating on the third book," she says. "Endings are really important, and the third book is supposed to be ending the trilogy. I want it to be super awesome, but it's a little hard to concentrate when I'm worried about the second [book] and all this other stuff is going on. I'm just going to have to try and step away from it."

Putting a satisfying cap on the series is no simple task. As described in a Riverfront Times profile earlier this summer, Leckie's Ancillary Justice introduced readers to the galaxy-spanning Radch empire, a xenophobic, planet-conquering civilization that employs artificial intelligences to command its biggest military starships and legions of reanimated zombie soldiers called "ancillaries." Breq, the novel's heroine, is a millennia-old AI who becomes trapped in the body of an ancillary after her ship is destroyed.

The novel's complex, multi-narrative plot also introduced an ingeniously exploited linguistic gimmick -- the Radch culture and language are completely gender neutral. Because Leckie writes through the eyes of Breq, the narrative keeps particular characters' genders a mystery until much later in the novel.

By all accounts, readers and critics loved the gender-blurring space opera, but the novel appears to have arrived at a critical moment the science-fiction literary community. In May, Leckie headed the first all-female slate of Nebula winners in the award's 50-year history, and she did so against the backdrop of a roiling sexism controversy within the Science Fiction and Fantasy Writers of America, the organization whose members voted for the Nebula winners.

The 2014 Hugo Awards -- held during the World Science Fiction Convention in London on August 17 -- brought its own controversies. By a quirk of voting rules, Robert Jordan and Brandon Sanderson's fifteen-book Wheel of Time series was allowed onto the ballot for Best Novel, and many (including Leckie) theorize that the series' inclusion contributed to the record number of Hugo voters this year. The Hugo Awards are decided by popular vote among the convention's attendees, and this year's 3,587 cast ballots more than doubled the previous record number.

"I'm a little freaked out. It's pretty amazing and strange," Leckie says, reflecting on her novel's success.

In London, after hearing her name called the award, Leckie kept her acceptance speech short and sweet.

"You write alone, but it make such a tremendous difference to have your family love and support you, whatever sort of family it is that you have," she said. She directed her next line to her new fans. "But most of all, I would like to thank you. You write alone, like I said, but you write hoping that there will be readers who will connect with what you write."