Michael Brown's death may have been the spark that ignited revolt in Ferguson, but for two weeks now, the spotlight of the world's media has been trained on the looting, the artillery, the gas masks, the SWAT tanks -- anything but the grieving family mourning a dead son.

Today, with several consecutive nights of calm and order on West Florissant Avenue, that spotlight will circle back to those most hurt by Brown's death: his parents, who, after waiting two weeks for three autopsies, just want to put their son to rest.

The funeral is scheduled for 10 a.m. Monday at Friendly Temple Missionary Baptist Church. Brown's uncle, the Reverend Charles Ewing, will deliver the eulogy for his nephew who inspired a worldwide call to justice after being fatally shot by Ferguson police officer Darren Wilson on August 9.

The Reverend Al Sharpton, who came to Ferguson after the shooting at the request of Brown's grandfather and has become the liaison between Ferguson and the White House, will also speak during the service. Brown will be buried in St. Peter's Cemetery in St. Louis County after the funeral.

Read all Riverfront Times coverage of Michael Brown and Ferguson.

Funerals can be expensive, but the Brown family has some help. St. Louis native Kimora Lee Simmons and Sharpton himself offered to pay for the funeral, but it's the Alpha Phi Alpha Fraternity Inc., who'll pick up the check for the service. Alpha Phi Alpha, the nation's oldest black fraternity, declined to share how expensive the funeral (which can accommodate more than 4,500 people and is likely to draw a large crowd and media presence) will be. 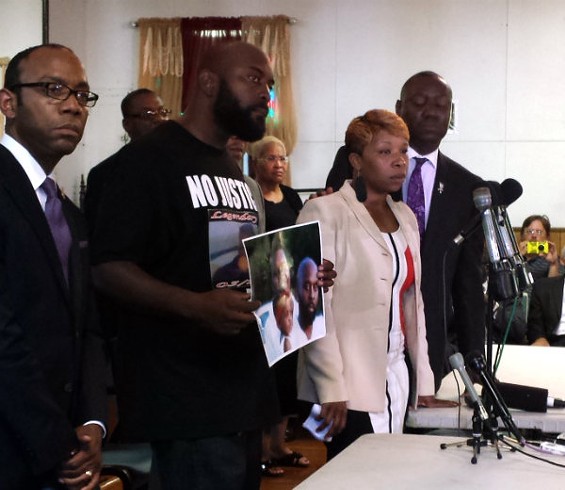 More than 8,000 supporters donated over $200,000 to the Brown Family in the last eleven days using GoFundMe.com, and a benefit concert at Plush Sunday night raised even more. (Compare that to two online fundraisers for officer Darren Wilson, who shot Brown, which have raised nearly $370,000.)

Three aides to the White House are also coming to St. Louis for the funeral: Broderick Johnson, chairman of My Brother's Keeper Task Force, which empowers boys and men of color; Marlon Marshall, deputy director of the White House Office of Public Engagement who also grew up in St. Louis and went to high school with Brown's mother; and Heather Foster, an adviser in the Office of Public Engagement.

Check back with Riverfront Times today for photos and coverage of Brown's funeral.